A Writing Chance: Margins to Mainstream

Stephen Tuffin, Associate Lecturer on OU Creative Writing courses A215 and A363, has recently won A Writing Chance bursary – an award that celebrates fresh perspectives and great stories from people whose voices have not historically been heard in publishing and the media. This UK-wide project is co-funded by actor Michael Sheen and the Joseph Rowntree Foundation, and supported by the New Statesman and Daily Mirror, with research into barriers to publication being conducted by Northumbria University 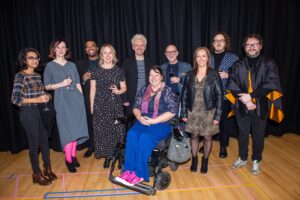 We asked Steve to tell us about how his own class background and experience of disability have both helped and hindered his journey into publishing and academia.

I first started writing when I was a road worker. I wrote on bits of paper in the days before PCs. I didn’t write much or very often because much of the time I was too exhausted. The days were very long and very tough.

But, knackered or not, I had this urge to write. I wrote fiction. Short fiction. I didn’t write poetry because I didn’t like it. I didn’t understand it, and, in any case, only posh people read or wrote poems.

Despite not having enough the money, I signed up for the Writers Bureau, and set about learning to write. I paid in instalments, completed several assignments, and was thrilled to receive feedback. But I defaulted on the payments and so was unable to continue.  I believe I still owe the Bureau so I’m hoping they don’t read this.

My life took me to Swindon in search of employment. I did a City and Guilds apprenticeship and became a carpenter. I worked on sites all over the place and eventually found myself working at The Institute of Directors in The Mall. I worked there as the lone maintenance man and so found plenty of time to read. I read thrillers and novels about barrel-chested men, with firm chiselled jaws, and women with hour-glass figures and names like Storm. In my spare time, I continued to write. I only ever shared my writing with my wife. No one else. I had trouble with my spelling – and still do.

One day I acquired an electric typewriter – it was being replaced with a new model. I set it up at home and imagined myself to be Hemingway even though I’d never read a word he’d written. I smoked while I wrote. One roll-up after another. I hung doors in the daytime and typed words out at night. Hanging doors is hard physical work but isn’t anywhere near as knackering as digging trenches.

Time passed and the PC came along. Now I could see my words on a screen, as if they were in print, and I could correct my spelling as I went along. I wrote short stories about working-class people – café workers, shop workers, road workers. I wrote what I know.

I fell ill. I was diagnosed with Ankylosing Spondylitis and so my life on site was over. I lost my job, my income and my dignity. I had no idea what I would do next. I considered work in B&Q or as a storeman at the building firm where I’d worked as a carpenter. But my wife had started a course at our local college, and I decided to follow suit.

I wrote my first full length play in the 2002. It was called Roger and Gerald and I didn’t have a clue what I was doing, but I did it. I sat up late into the night and I wrote. I heard their voices in my head, these two men, talking, laughing, arguing, loving. I finished the play and I sat back, and I rolled a cigarette and I felt good.

My college studies took me to Bath Spa University where I gained a BA and an MA in Creative Writing. Later on, I taught there on their undergraduate programme, and it was then that I saw an advert for Associate Lecturers with the Open University. And here I am.

It’s been an interesting journey.

If I am being honest, I’ve always felt a little apart from my colleagues. They are all lovely, but they seem very posh to me. And so much smarter than me, and well educated. In a nutshell, middle-class. And I, well, I was a road worker masquerading as a clever person.

I lived too long in that world to suddenly become something else. And I am proud of that world too. I don’t see why, as a working-class man, I can’t enjoy these things that I’ve been led to believe can only be appreciated by the middle-classes. But don’t get me started on that. 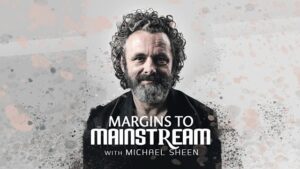 You can listen to Martin Sheen read Steve’s work on the BBC’s Margins to Mainstream (about 14 minutes into the programme). This episode also features the work of another awardee, Maya Jordan, who studied creative writing at the OU.

Now I am on this wonderful programme fronted by Michael Sheen for underrepresented writers, and I am seeing my writing take off in a way it never has before.

And the thing is, I have my arthritis to thank for it. So, good things can come in painful packages. Had the AS not got a hold of me I would still be out on site. I wouldn’t be writing this and would never have met all the fine and good people I have taught and worked with over the 16 years I’ve been employed by the OU. 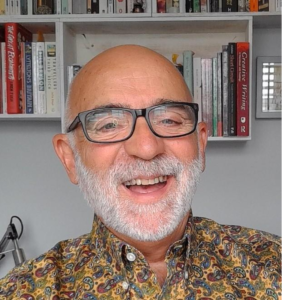 Stephen Tuffin was born in 1958 on a council estate on the south-east coast of England. A former butcher’s boy, cook, cab driver, door-to-door salesman, care home assistant, road worker and builder, he now lives in Swindon and teaches creative writing at the Open University. He is a working-class writer writing working-class stories inspired by the remarkable and raw world he has lived and worked in for most of his life.