On writing The art of The Faerie Queene

On their virtual stand at the Renaissance Society of America’s annual meeting, Manchester University Press recently featured Richard Danson Brown’s latest book, The art of The Faerie Queene. Richard is Professor of English Literature at the Open University, and Head of the School of Arts and Humanities. Here, he shares with us the longstanding obsessions, academic collaborations, and scholarly disagreements that informed his writing of The art of The Faerie Queene. 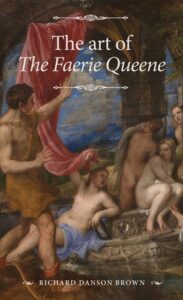 If I believed in fate, I would say that I was destined to write this book, since it reflects obsessions I’ve had for most of my adult life and probably earlier: poetic forms, what those forms tell us, how skilful writers work with those forms to create new texts, what claims such formal work might have on us as readers. From first reading it aged 19, The Faerie Queene had seemed to me a formal structure—or rather a series of formal structures—of the utmost intricacy, where the liaisons between poetic line and poetic conceit were always shifting, always provocative.

As it is, I am not a fatalist, so there are other, more persuasive accounts for its genesis: firstly, my collaboration with Julian Lethbridge on the Concordance to the Rhymes of The Faerie Queene (2013) left me with an unfinished sense that there was more to say, even after the two comparatively long studies we contributed to that vast volume. Academic collaborations are productive as much for the swerves they induce in thinking as the moments of agreement around shared ambitions. While Julian and I very much agreed that form was a neglected category in post 1980s Spenser criticism, we were to take that thought in different directions. While for Julian, the evidence of the Concordance pointed towards Spenserian automation—what he calls the “non-expressive” aspects of The Faerie Queene—for me, those same data sets sent me back towards poetic particularity, and a sense that even if Spenser is often formulaic (and he is), readers can never take automatism on trust. Each instance of poetic usage at some level demands the reader recodes familiar lexis and stanza form in terms of “darke conceit”.

I was strengthened in this perspective by a different collaboration, with David Lee Miller, on Spenser Review. In between the pleasurable stresses of editing the journal for its three appearances a year, David and I would exchange emails and conversations about latest projects, with him gently insisting that he genuinely did want to see draft chapters from what was at that stage a much delayed and longed-for project. (As well as book reviews editor on SpR, I was at that period dean of a faculty in a university undertaking a momentous “change process”; “O pittious worke of MUTABILITIE!” indeed.) David’s readings strengthened the book at every page, demanding more craft, and broader sympathies, as I worked through a structure which one reader called an “inverted Christmas tree,” moving from individual words, via lines, meters, rhymes, and stanzas up to the larger forms of cantos and books and the poem as a whole. My book as it turned out was inconceivable without the input of Julian and David, which is why I dedicated it to them jointly.

Writing about your own work is always mildly queasy. (Maybe this is a scholarly version of the modesty topos, but I am not faking for effect.) For many years, I found it difficult to reread my first book (on the Complaints). With The art of The Faerie Queene, I have related but different feelings. In an ideal world, it would be more comprehensive—less tendentious and show-offy. But we don’t live in such a world, and I look at this book, with the beautiful painting of Titian’s Actaeon fatally raising his arm towards the naked Diana on the cover, with a kind of equanimity. Some of the things unsaid from the Concordance are contained within these covers.

Thanks to Manchester University Press for allowing us to repost this piece, which was originally published on their blog. 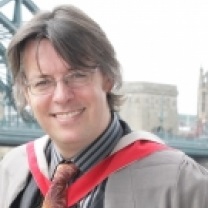 Richard Danson Brown is Professor of English Literature at the Open University, and Head of the School of Arts and Humanities. Throughout his career, his main research interest has been the poetry of Edmund Spenser, but he has also worked extensively on the poetry and drama of Louis MacNeice. Richard has had his own poems published in several magazines, and was an editor of The English Review, a peer reviewed magazine aimed at sixth form students.

Lecturer in Creative Writing at the open University, Director of the Ruppin Agency Writer's Studio (a nationwide literary mentoring programme), and award-winning author of novel OWL SONG AT DAWN and co-author with Emily Midorikawa of non-fiction book A SECRET SISTERHOOD: THE HIDDEN FRIENDSHIPS OF AUSTEN, BRONTË, ELIOT AND WOLF.
View all posts by Emma Claire Sweeney →
This entry was posted in Research and tagged Concordance to the Rhymes of The Faerie Queene, David Lee Miller, Edmund Spenser, Julian Lethbridge, Louis MacNeice, Manchester University Press, Open University, Renaissance Society of America, Richard Danson Brown, Spenser Review, The art of The Faerie Queene, The English Review, The New Poet: Novelty and Tradition in Spenser’s Complaints. Bookmark the permalink.