Over the last year or so, I have been facilitating a series of creative writing workshops on the theme of responding to images or objects. I was interested in exploring some outreach opportunities, especially the application of my current PhD research: on the ekphrasis of abstract or monochromatic artworks, supervised by Siobhan Campbell and Jane Yeh. In part, I was looking to test some of my poetic strategies and methods with the general public: those who already thought of themselves as practitioners or had a casual interest in creative writing.

I began with a short series of workshops at the Whitworth Art Gallery and Manchester Museum (autumn 2018 – spring 2019). Here I asked participants to respond to a visual prompt. At the Whitworth, this was an artwork that could be freely chosen after having wandered around the gallery; and at the museum, I selected some artefacts from the holdings on the theme of ‘flight’, and these were presented in the middle of a table, as shown below. 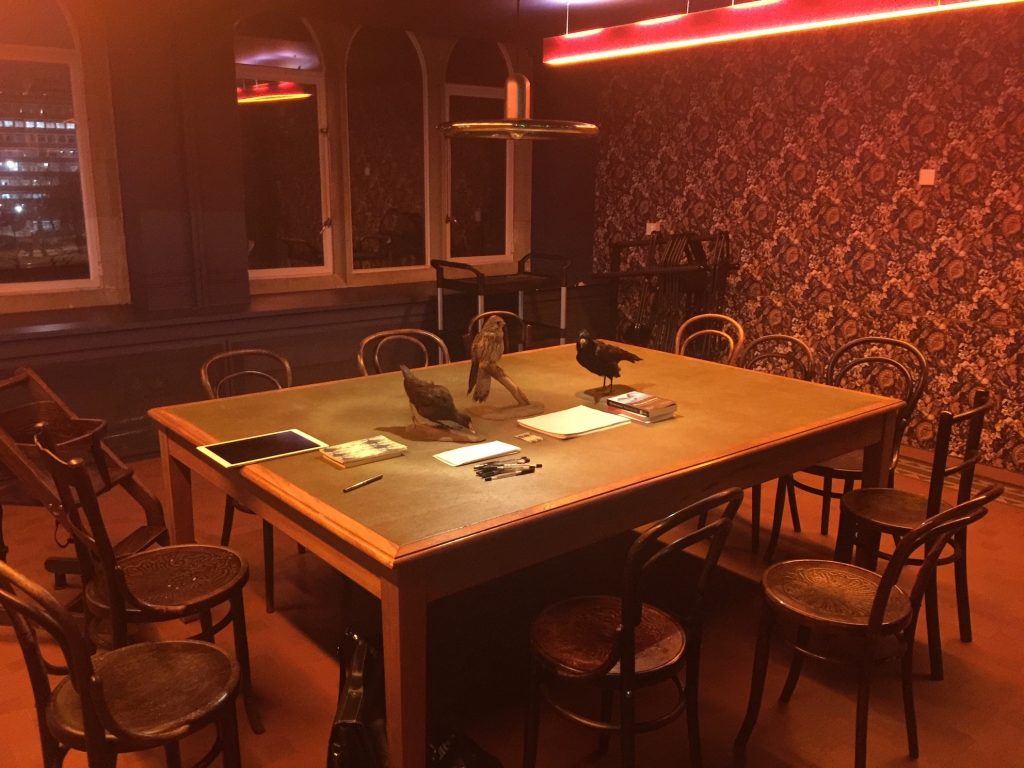 The groups were asked to explore some free writing in response to their prompt over the duration of 25 minutes. We then discussed the experience and approach, and we had an opportunity to read out what we’d written.

Given that the series was funded by the Arts for Health Programme at the University of Manchester, and the workshops were aimed at carers, I also felt it was appropriate to discuss the therapeutic effects, if any. I was interested in the possibility of writing as catharsis, especially while using images or objects as a form of mediation. I was grateful to the participants that we were able to have these conversations towards the end of each session.

More recently, I ran a joint workshop (again on creative writing in response to images and objects) with Fran Hughes, as part of the AHRC conference on Trust and Truth at the University of Cambridge (September 2019). In this case the participants were, for the most part, postgraduates. Here we asked them to work in groups, using a similar method to that used in the parlour game ‘consequences’, to produce creative writing and images. Not only did the exercise result in some highly imaginative first drafts, it also worked fantastically well as an icebreaker and encouraged participants to get to know one another.

At present, I am now working again with Manchester Museum on the Creative Writing for Carers scheme. I have been asked to run a series of sessions through the autumn (2019), which will also function as a short course. With the additional time and scope, I want to explore a wider array of possibilities, especially in terms of how participants might approach their interaction with a chosen artefact. In addition to grounding what can often be highly specialised ideas (such as ekphrasis) in the playfulness of creative writing sessions, I also hope to glean new ideas for my own practice and add a social dimension to my research activity.

This entry was posted in Reflections, Teaching and learning and tagged Arts for Health, ekphrasis, Manchester, Whitworth Art Gallery, writing as catharsis. Bookmark the permalink.