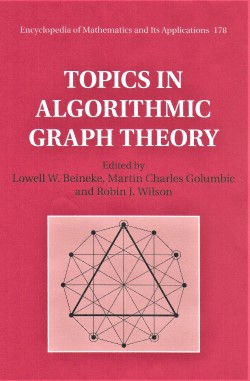 Professor Robin Wilson has published his 51st book Topics in Algorithmic Graph Theory, which he edited together with Lowell Beineke (Purdue) and Martin Charles Golumbic (Haifa), and which is published by Cambridge University Press.

A summary of the book is as follows.

Algorithmic graph theory has been expanding at an extremely rapid rate since the middle of the twentieth century, in parallel with the growth of computer science and the accompanying utilization of computers, where efficient algorithms have been a prime goal. This book presents material on developments on graph algorithms and related concepts that will be of value to both mathematicians and computer scientists, at a level suitable for graduate students, researchers and instructors. The fifteen expository chapters, written by acknowledged international experts on their subjects, focus on the application of algorithms to solve particular problems. All chapters were carefully edited to enhance readability and standardize the chapter structure as well as the terminology and notation. The editors provide basic background material in graph theory, and a chapter written by the book's Academic Consultant, Martin Charles Golumbic (University of Haifa, Israel), provides background material on algorithms as connected with graph theory.