22nd November 2019 marks the 200th anniversary of the birth of novelist George Eliot, born Mary Ann Evans. Appropriately 22nd November is St Cecilia’s day, in honour of the patron saint of music. Music played a particularly vital role throughout Eliot’s life and this is reflected in the musical characters and pervasive references to music in her fiction. She was a keen piano pupil who continued to play in adulthood, and she loved attending concerts. Handel’s Oratorios featured large as they did for many of her contemporaries, and so did composers such as Beethoven, Schubert and Schumann, whose work she could also play at the piano. Eliot was one of the first champions of Wagner in Britain, although she was less enthused by his music than by his ideas on dramatic unity. The Romantic repertoire was where she was most at home. With her partner, the philosopher and scientist George Henry Lewes, Eliot enjoyed opportunities to hear music in London and abroad, meeting Liszt on their first visit to Weimar together in 1854. In London, they attended both public concerts, in fashionable venues such as St James’s Hall, and private concerts where leading musicians such as the violinist Joseph Joachim and singer (later conductor) George Henschel, performed for guests. Music making was also a significant part of their own social entertainments and domestic life.

A material trace of Eliot’s passion for music remains in the form of a fine Broadwood piano, now housed at the Herbert Art Gallery & Museum, Coventry which was purchased by Lewes for Eliot’s 50th birthday. It thus became a presence in her life precisely 150 years ago on this 22nd November. Her anniversary provides a fitting opportunity for us to reflect on what this piano meant to her and what it adds to our understanding of her life and work. For us it’s also a question of what significance we invest in material relics of the past; what does Eliot’s piano, standing there in the museum, mean to us 150 years on? 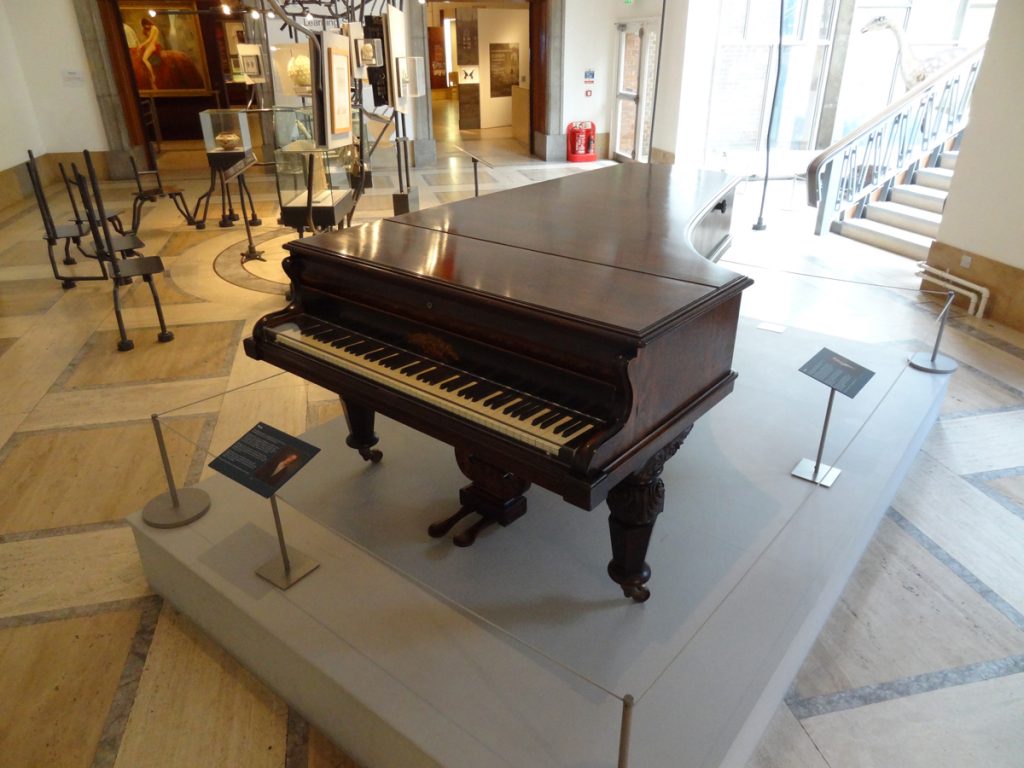 On 22 November 1869, this piano was delivered to a grieving household. Lewes’s middle son, Thornfield, had returned from farming in Africa with a painful illness and had died, aged 25, just a month previously. Neither Eliot, who was writing Middlemarch, nor Lewes, were able to work. That the piano was purchased now, marks its significance. Not surprisingly, no flurry of references to the new piano fills Eliot’s correspondence at this date. Fittingly however, the piano is an implied source of solace a decade later when, on the first anniversary of Lewes’s own death, Eliot’s diary for 8 Sept 1879 reads simply: ‘Darwin. Schubert’ (Journals, 180). ‘Darwin’ may denote a visitor, or his books; Schubert she must have been playing at the piano. Eliot’s journal further records that she had ‘Touched the piano for the first time’ after Lewes’ death on 27th May (Journals, 175). However the piano, which survives in the Herbert Art Gallery and Museum, represents not just the personal importance of music for George Eliot but its significance for numerous areas of Victorian culture. 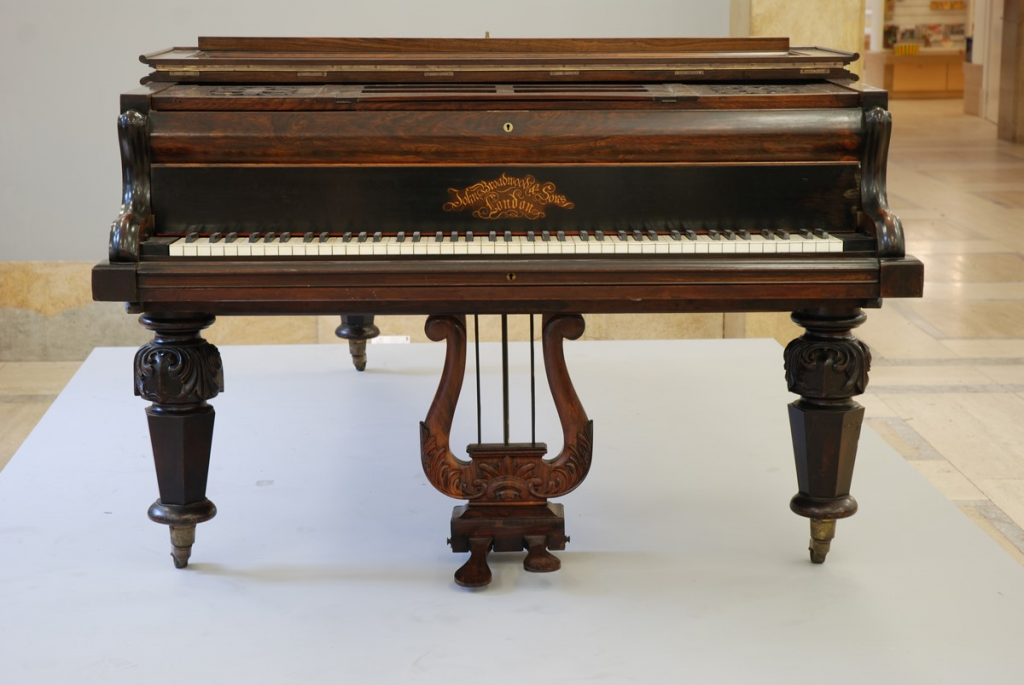 The purchase of this fine piano was possible because of Eliot’s success as a novelist, although the fact that it was acquired before the publication of Middlemarch, which made her wealthy, is a further indication of its priority. Nor was it the first Broadwood that Eliot had owned. The first, purchased in 1861, marked an early milestone in her successful career. The enthusiasm conveyed in Eliot’s letters communicates the central place a piano occupied in the Lewes’s domestic and social lives. ‘Today our new grand piano came – a great addition to our pleasures’ Eliot records in her journal for 1st October 1861 (Journals, 102). Later that month, she writes that a state of good health and spirits might be attributable to her ‘new grand piano, which tempts me to play more than I have done for years before’ (Letters, III:460). The next year she mentions being unhappy with the piano’s touch – no doubt among the reasons for subsequently replacing it (Letters, IV:30). Despite this reservation, Eliot makes repeated references over the following years to the benefits she derives from ardent and energetic practice (Letters, IV:120, 127). In 1862, the Lewes’s rearranged their entire drawing room to improve the piano’s position and sound (Letters IV:30). It became a centrepiece of social gatherings including the increasingly important Sunday salon held at The Priory, their house at 21 North Bank, Regents Park, purchased in 1863; from 1869 this will have been the place occupied by the new piano, when the Sunday salon resumed shortly after the death of Thornton Lewes for whom Eliot had frequently played during his illness. Their musical evenings were attended by an array of literary and scientific figures, including the poet Robert Browning and Herbert Spencer, founder of sociology, who would join in the singing. 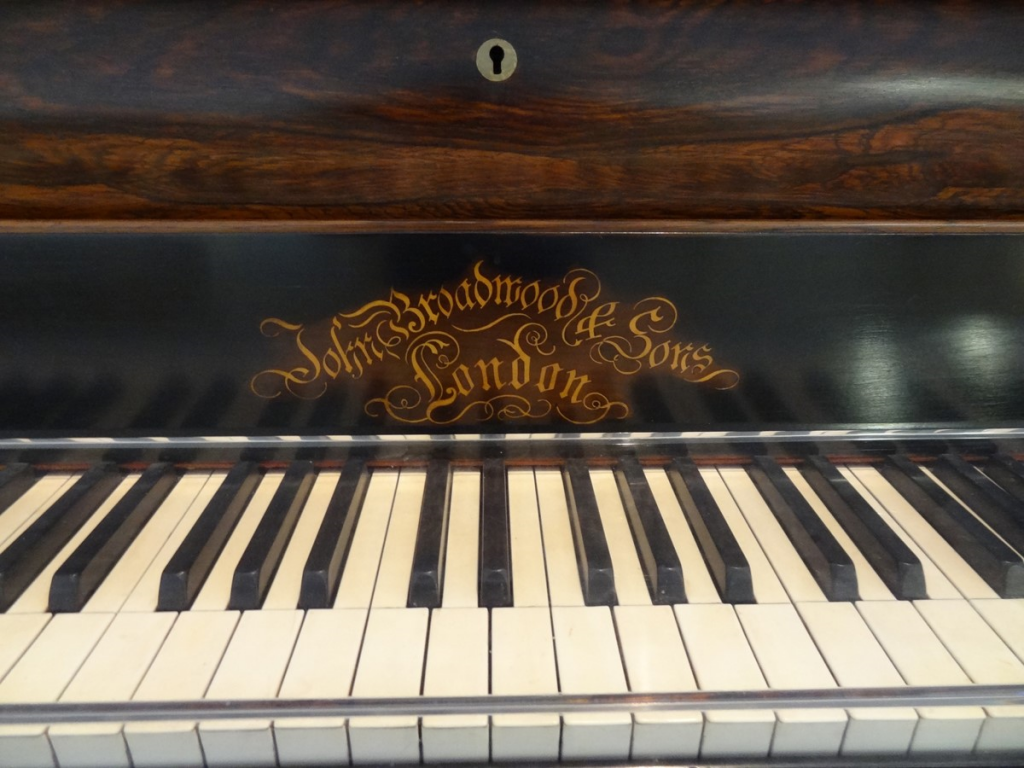 The arrival of Eliot’s first Broadwood had been celebrated, on 5th October 1861, with a ‘Beethoven night’ the first of many musical evenings in which music of the Romantic period predominated (Letters, III:456). Eliot owned numerous Beethoven scores and when she acquired her first Broadwood, had been playing Beethoven duets ‘with increasing appetite every evening’ with her eldest step-son, Charles Lee Lewes (Letters, III:346). The liberal politician Frederick Lehmann (1826-1891), who visited The Priory to play Mozart and Beethoven sonatas for piano and violin with Eliot during 1866, described her as ‘a very fair pianist, not gifted, but enthusiastic, and extremely painstaking’; their audience was Lewes who would ‘groan with delight whenever we were rather successful in playing some beautiful passage’ (Letters, VIII: 385 n.7). In October 1868, Eliot wrote to Charles requesting him to buy ‘some music from your city man’; she asked Charles to choose ‘things by Schumann and Schubert, of the genre, for example, of Schumann’s Arabesque.’ (Letters, IV:478). Also I should like to have an arrangement of Verdi’s best operas for the Piano. Pater likes hearing those things’ (Letters, IV:478). Verdi was certainly not the only opera composer to be played, in piano reduction, on this new piano. In the late 1870s, when Lewes was already seriously ill, John Cross discovered him giving enthusiastic renderings of Rossini, singing ‘the great portion of the tenor part in the Barber of Seville – George Eliot playing his accompaniment, and both of them thoroughly enjoying the fun’ (Cross, III:334). The composers that Eliot played on this piano are frequently alluded to in her novels and Romantic composers in particular were a standard against which literary contemporaries were measured. In an 1856 review she wrote that ‘Turning from the ordinary literature of the day to such a writer as Browning, is like turning […] to the distinct individuality of Chopin’s Studies or Schubert’s Songs’ (Selected Essays, 350). While most details of their existence are lost to us, the wood and metal structures of this piano, that once sounded in response to Eliot’s touch, embody the meetings in music and conversation shared by the writer and her contemporaries.