Light Documents: The Personal Inspiration for a Research Project

It has always struck me as peculiar that academics tend to conceal personal origins or motives for their research. More often than not our deep investment in a subject or area of study appears to have emerged out of a vacuum or with disinterest. Little is said of how intellectual concepts bear a significant and abiding relation with, or are even a sublimation of, our innermost vulnerabilities or concerns.

As a response to this observation, I wish to present a kind of prequel to my area of research (the ekphrasis of dark or near-black paintings), one that will share with the reader how such a rarefied focus developed, organically, in and through my personal life; how, for instance, my recent poem on Kasimir Malevich’s Black Square is beyond any casual or highbrow interest, related with what is most intimate and precious (for the poem click here). Moreover, by writing in this way my hope is to present a hybrid piece of writing that blends academic and confessional registers.

My late wife who passed away in the summer of 2017 was a phenomenally talented photographer and artist; what makes her talent all the more noteworthy is that she was visually impaired. Born blind in her right eye, Kim developed retinitis pigmentosa in her late thirties, and before long she was left with what she described as her ‘two O-clock aperture’ in her left eye, through which she could still discern the odd colour, some contrast and movement. This limitation did not deter her though; her imagination thrived and she advanced a genre of photography which she called ‘light documents’: chance shadows or sun beams thrown on walls or other parts of the domestic space: 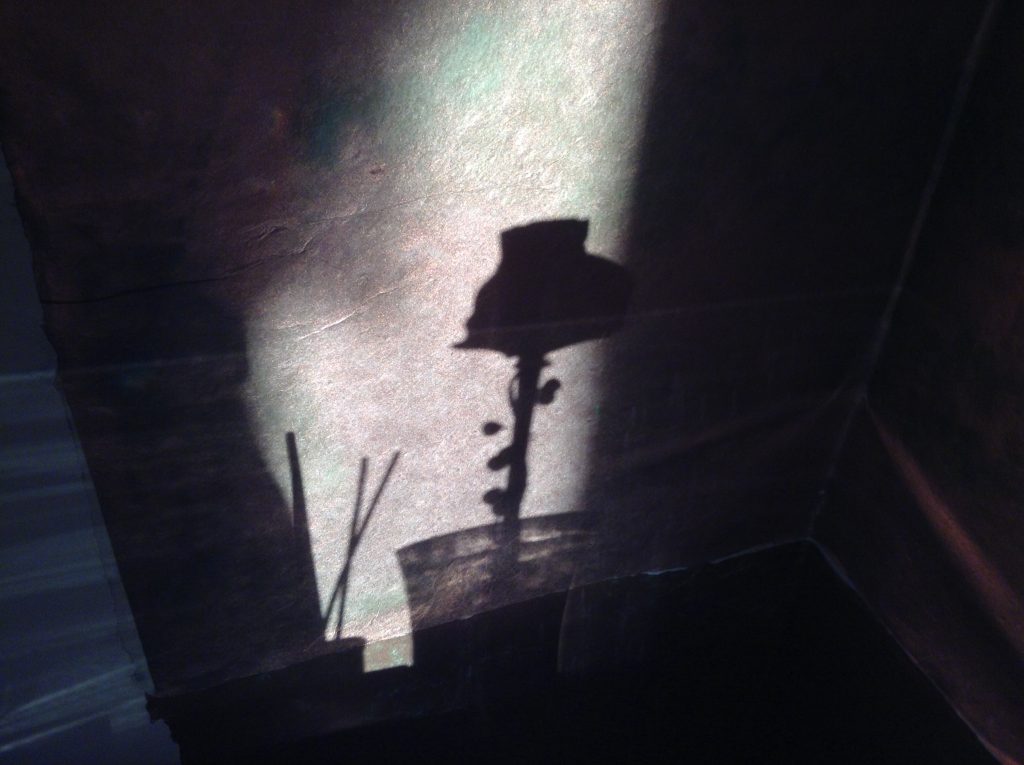 I think my interest in ekphrasis (writing poems in response to visual art) was born out of my role as a partner, often tasked with describing how two-dimensional things appeared, from dresses to wallpaper. Essentially, each day, I was engaged in a verbal ekphrasis, as a means of conveying to Kim what aspects of the visual world looked like, particularly patterns, shapes and colours. I was also, with melancholy, striving to reach into her darkness – or to bring her darkness into the light – evoking the Orpheus myth. Her blindness often seemed like a limitation on our closeness; and so I struggled with words to reduce the distance between us. Poetry is about this kind of struggle for me: representing how we continually fall short in our efforts to describe.

I was especially inspired though by Kim’s ability to find so much in the darkness and in shadows (her favourite book was In Praise of Shadows by Jun’ichirō Tanizaki). She discovered such ethereal beauty in random glints of light, spectral colours on walls, or numinous shapes on the ceiling. As a student of Art History, she also had recollections of art works she had previously seen, and was thus able to make comparisons. Her visual acuity was also informed by learning about optics and ideas such as the Golden mean and compositional balance, in anticipation of a condition that she knew to be hereditary.

Now, carrying the burden of grief and the honour of her legacy, I feel it is important to not only acknowledge Kim’s influence upon me – a catalyst in the development of a PhD on writing with dark or near-black paintings in mind – though also to continue to write poems with a heightened awareness that the Orphic task has, if anything, intensified: to insist her vision, in spite of death, is not lost; to allow her presence to live once more in and through my writing. Her lesson for all, as I see it (and encapsulated in the premise of my thesis), is that meaning can be found in even the darkest of images; and, more pertinently, life can be affirmed even after all appears lost.

This entry was posted in Research and tagged ekphrasis, Orpheus, photography, poetry. Bookmark the permalink.

3 Responses to Light Documents: The Personal Inspiration for a Research Project