Voices from the Past: Peterloo and New Historical Fiction 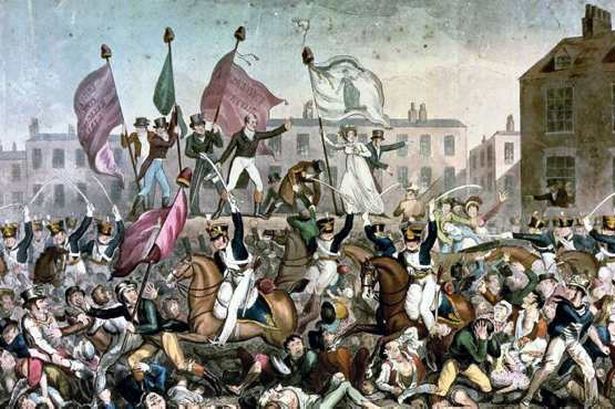 It’s exciting to hear that Hilary Mantel’s novel The Mirror and the Light will be published in March 2020. Like many thousands of historical fiction fans, I am impatient to see how she concludes her epic trilogy about the life of Thomas Cromwell. However, I’m also keen to see historical fiction focus on the lives of those who have been given only a footnote in the historical record.  Earlier this month I organised a conference in Manchester with my Creative Writing colleagues Heather Richardson and Joanne Reardon, commemorating the anniversary of the Peterloo Massacre and considering the role of historical fiction in celebrating marginal voices from the past.

Held at the People’s History Museum, the conference brought together a number of speakers including writers and academics from different disciplines. The keynote was Jacqueline Riding, historical consultant to Mike Leigh for the film Peterloo.

Jacqueline briefly summarised the events that took place on 16 August 1819. On that day at St. Peter’s Field, a combined force of local yeomanry cavalry and British-army regulars  tore through a pro-democracy meeting of 60,000 people. Many of the local yeomanry were drunk.  At least 15 people were killed or died later from their injuries, including an infant and two women, and over 650 were beaten and maimed. This terrible event is the focus of increasing interest, with a number of books published recently including Jacqueline’s Peterloo: the Story of the Manchester Massacre.

The first panel discussion looked at the way in which historical fiction writers interact with historical fact, and why they tell the stories they do. Novelist Emma Darwin suggested that often readers go to historical fiction looking for stories that aren’t covered by history, sometimes focused on whole sections of the community, sometimes on individual voices that have not been heard, citing the example of Joseph O’Connor’s Ghost Light which tells the story of Maire O’Neill, partner and muse of Irish playwright J. M. Synge who became a successful Hollywood actress.

Michael Green talked about his novel The Ghosting of Anne Armstrong, and his research process. It is based on the story of a 14 year old girl who went before a justice in Northumberland  in 1673, accusing her neighbours of witchcraft. Michael came across the story on a plaque in his local pub, and became engrossed in the research journey, which eventually led him to the National Archives at Kew where he found Anne’s depositions. Her unlikely story caught his imagination: ‘A voice gets me and won’t go away.’

The panel ‘Touching history – tactile historical fiction’ focussed on the importance of tactile objects when connecting with the past. Vivienne Richmond presented on her work on the clothing of the working class and talked about her book Clothing the Poor in Nineteenth Century England. It is hard for us to understand the way that clothing was coded in the past, and historical fiction set in the Victorian period – such as The Crimson Petal and the White by Michel Faber – can help decipher such codes, because writers producing work for 21st century readers make information explicit which would have been implicit in the work of Victorian writers.

Vivienne also suggested that as the scraps of fabric that mothers left with their babies when leaving them at the Foundling Hospital in London are often vibrantly patterned, we can assume that they wore dresses made from such fabrics. The concept that we generally have of ‘the poor’ wearing clothes that were shabby and drab would only apply to the most deprived.

Heather Richardson talked about her research process in her novels Magdeburg and Doubting Thomas, and her recent project ‘A Dress for Kathleen’, in which she commemorates the life and death of her aunt Kathleen during a blackout in World War II by making a dress using a contemporary dress pattern and creating an artefact that blends the verbal and the tactile.

The final panel event was a ‘Big Book Group’ discussion in which Emma Darwin talked about her book The Mathematics of Love, which encompasses the Peterloo Massacre, and her latest publication: This is Not a Book about Charles Darwin. Emma described how The Mathematics of Love began as a response to a writing exercise where the prompt was ‘watch’. Immediately the image came into her mind of a red-coated English soldier watching a girl bathe in a Spanish river – and so her main character was born.

Throughout the conference there was a sense of connections being made and links being forged, and of possibilities for future collaborations. One conclusion is that this is a vibrant, multifaceted form that offers continually evolving interpretations of past realities. There is a full report of this conference on the Contemporary Cultures of Writing site.