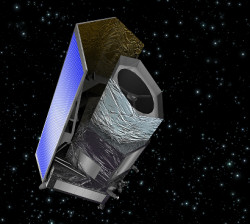 The Euclid mission was proposed, as part of the European Space Agency (ESA) Cosmic Visions programme, to investigate the history of the dark universe. Euclid was selected in October 2011 as the second M-class mission for launch in 2020. The primary goal is to study the dark universe by means of two cosmological probes: the Weak Lensing (WL) technique which maps the distribution of dark matter and measures the properties of dark energy in the universe and the Baryonic Acoustic Oscillations (BAO) technique which uses the scales in the spatial and angular power spectra as "standard rulers" to measure the equation of state and rate of change of dark energy.

The payload consists of a single telescope and the visible imager (VIS) and the near-IR photo-spectrometer instruments. After launch Euclid will take approximately 30 days to enter into an orbit around the second Sun-Earth Lagrange point, L2, where it will operate for 6 years.

During this period the spacecraft will be continually bombarded by charged particles from the space radiation environment, resulting in displacement damage within the CCD detectors. It is important to understand the impact of these defects on charge transfer within the CCD using a combination of experimental exploration of detector performance and simulating charge transfer with the aim to remove radiation damage effects from a science image. The CEI are working with a number of institutes, including ESA and Mullard Space Science Laboratory (MSSL), on the experimental characterisation and simulation of the radiation effects to the CCDs used in the Euclid VIS.

The main task of VIS is to enable Weak Lensing measurements. The dark matter (and ordinary matter) aggregates under the influence of gravity as the Universe expands. These overdensities distort light from background objects, so that they appear to have an additional, measurable, ellipticity. In general there is only mild distortion: this is weak gravitational lensing. The mass distribution can be inferred from statistical averages of the shapes of background galaxies distorted by this effect, enabling Euclid to map dark matter. Further, by using galaxies further and further away, the rate at which the agglomeration has occurred can be characterised. This is directly affected by the expansion history of the Universe, which appears at more recent times to be increasingly driven by dark energy, so the characteristics of the dark energy can consequently also be constrained.

To accomplish this task requires very large surveys in order to ensure a sufficient number of sources and to overcome the natural variations within the Universe, and, also, extremely accurate measurements of galaxy shapes. Systematic effects must be deeply understood, for example radiation damage, and a prerequisite for this is calibrations of the highest quality.

The VIS Focal Plane Array (FPA) consists of a silicon carbide structure, provided by the commissariat à l'énergie atomique (CEA), and will hold 36 Teledyne e2v CCD273-84 devices, located in a 6x6 matrix. There is a separate block of electronics which holds twelve sets of readout electronics (ROE), one for each set of three CCDs which are being developed by MSSL. 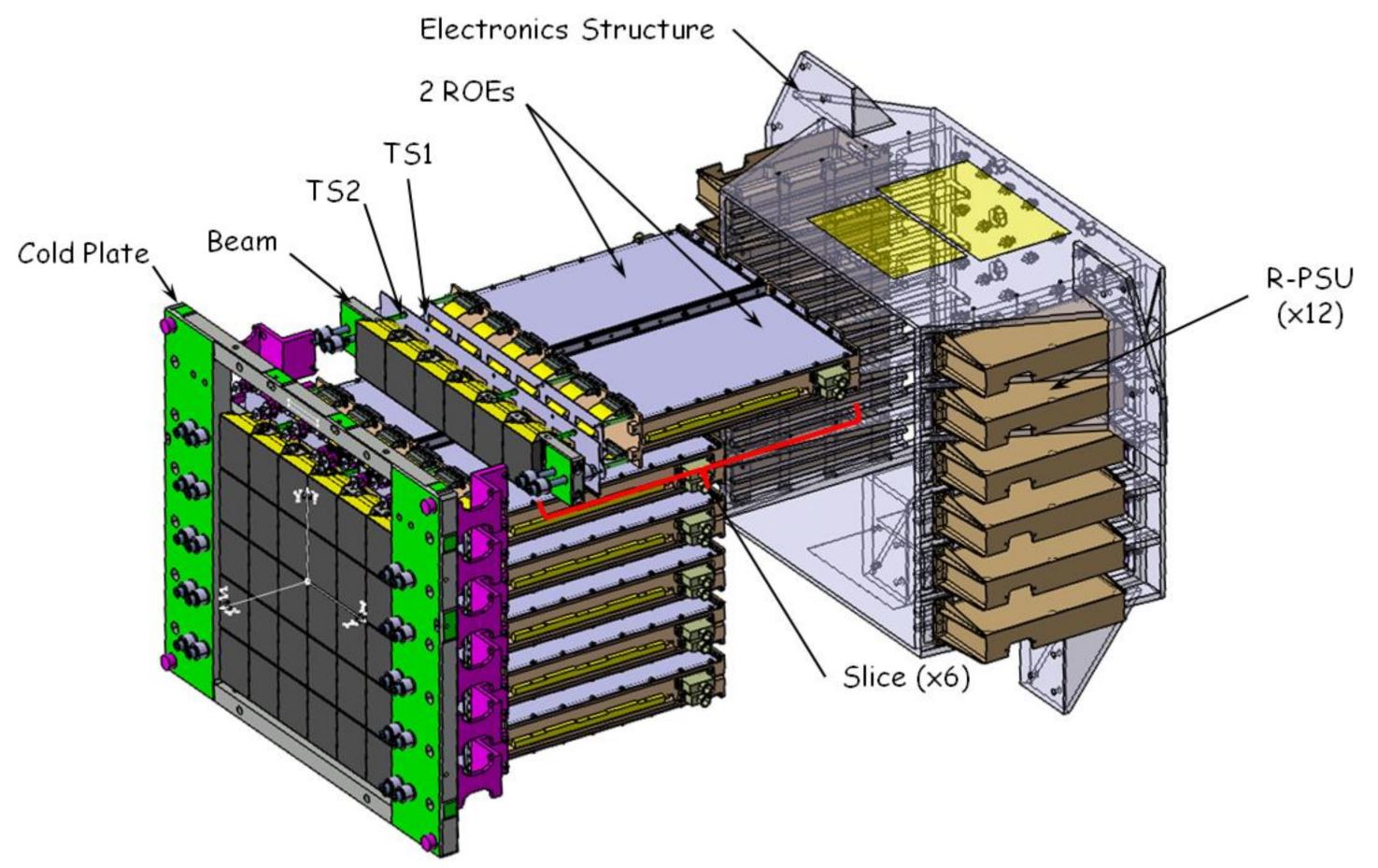 An expanded view of the focal plane array. The detector matrix is on the left, supported on six cold SiC beams each holding six CCDs within a SiC frame. The top row offset to the rear, to show its relationship of each triplet of detectors to their readout electronics (ROE) which digitise the signals. The cold frame holding the CCDs is mechanically decoupled from the framework holding the ROEs. Each ROE has its own power supply unit (R-PSU). Items labelled TS are the thermal shrouds to isolate the cold detector plate from the warm ROEs. “VIS: the visible image for Euclid”, Proc. SPIE, 2014. 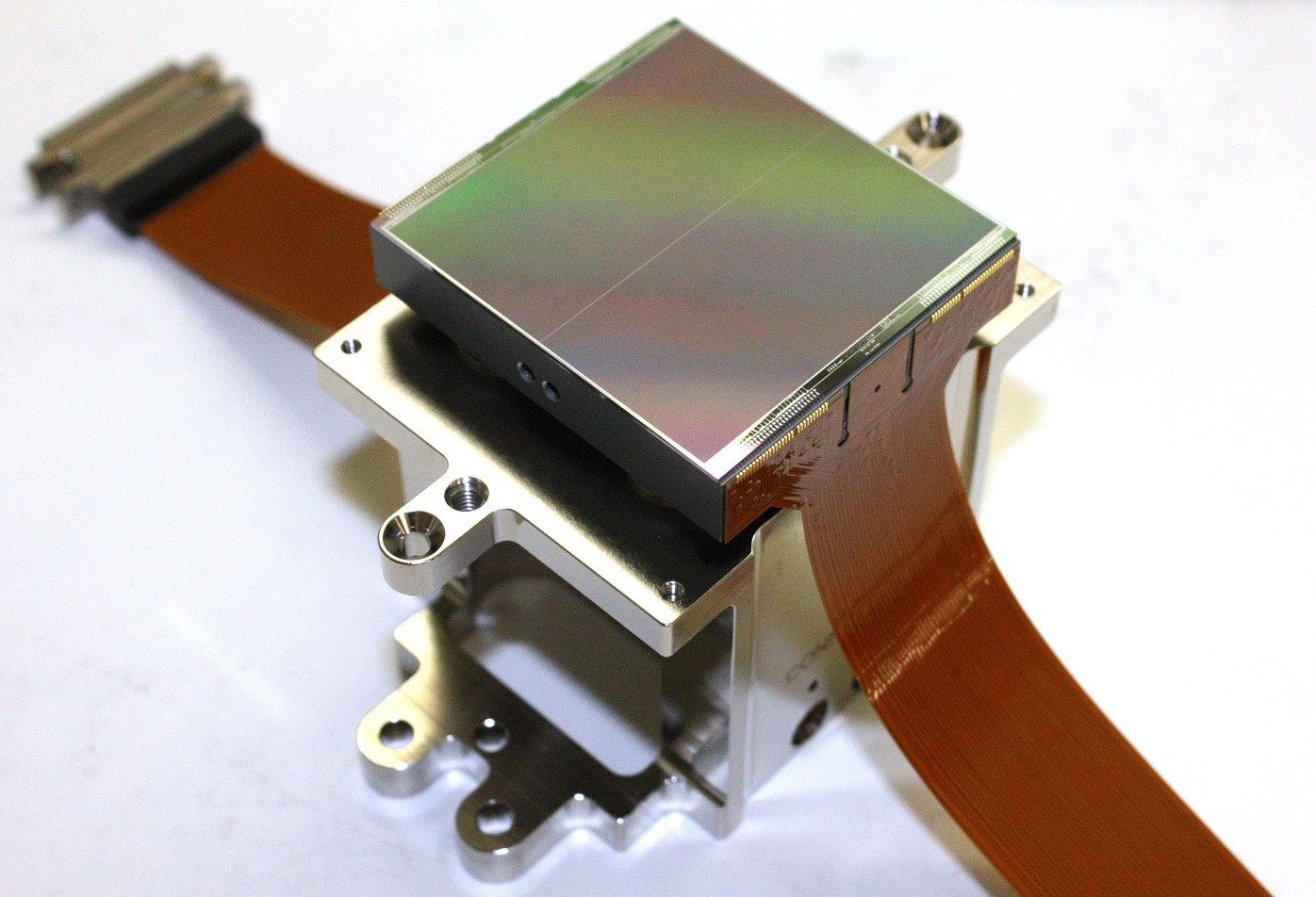 The CCD273-84, a thin-gate 4k × 4k device with 12 µm square pixels, is a custom CCD produced for Euclid based on the CCD203 which was flown on-board the Solar Dynamics Observatory launched in 2010. The CCD273 incorporates a charge injection structure (taking the place of the central 4 pixel rows), a register width of 20 µm and a low noise output stage, as used in the CCD231. As binning was not required for VIS and experimental and simulations performed by the CEI indicated an improvement in serial charge transfer the channel width was redcued from the 50 µm in the CCD203.

The CEI first became involved with Euclid in 2009 performing an experimental characterisation to assess the charge transfer efficiency at temperatures around the Euclid operating temperature of 153 K with the aim to recommend an operating temperature and the optimal clocking scheme for use in flight. This work and discussion between Teledyne e2v, ESA and the Euclid-VIS consortium led to the creation of the custom CCD273 which demonstrated improved serial charge transfer performance as a result of the reduction in register channel width.

The next step is to continue to assess the post irradiation performance of the CCD273, which will include a cryogenic irradiation of a number of CCD273s one of which will be irradiated cold and kept cold over an extended period of time. This will enable the CEI to explore the defects which will impact the charge transfer process inflight, avoiding uncertainties created as a result of annealing during a standard room temperature irradiation. The defects will be investigated using charge transfer efficiency measurements (X-ray, Extended Pixel Edge Response, and First Pixel Edge Response) and ‘trap sweeps’ whereby trap pumping is performed over a range of transfer speeds.