The Solar-wind Magnetosphere Ionosphere Link Explorer (SMILE) is a collaborative space mission between the European Space Agency ESA and the Chinese Academy of Science (CAS). The aim of the mission is to build a greater understanding of the Sun-Earth connection by measuring interactions between the Earth’s magnetosphere and highly energetic solar winds. Launch is currently scheduled for November 2024.

The SMILE video gives an overview of the project.  This can be downloaded here.

The Centre for Electronic Imaging (CEI) is responsible for the CCDs that will lie at the heart of the Soft X-ray Imager that will take spectral images of the earth’s magnetosphere. The radiation environment in space will result in long term damage to the CCDs over the course of the mission, as well as contributing to the instrument background. Researchers at the Open University will be concentrating on optimising the CCD performance to maximise the science return of the mission through modelling and experimental campaigns.

A radiation damage assessment campaign is currently ongoing that will involve exposing CCDs to a radiation dose similar to that which will be experienced by the flight devices over the mission lifetime.

Characterisation and calibration of the CCDs with soft X-rays is currently ongoing to understand their response to different energy X-rays. Initial calibration will be made using 55Fe isotope source within a cryogenically cooled test chamber.  Further tests will be conducted using the PTB-EUV beamline at the BESSY-II synchrotron facility in Berlin. 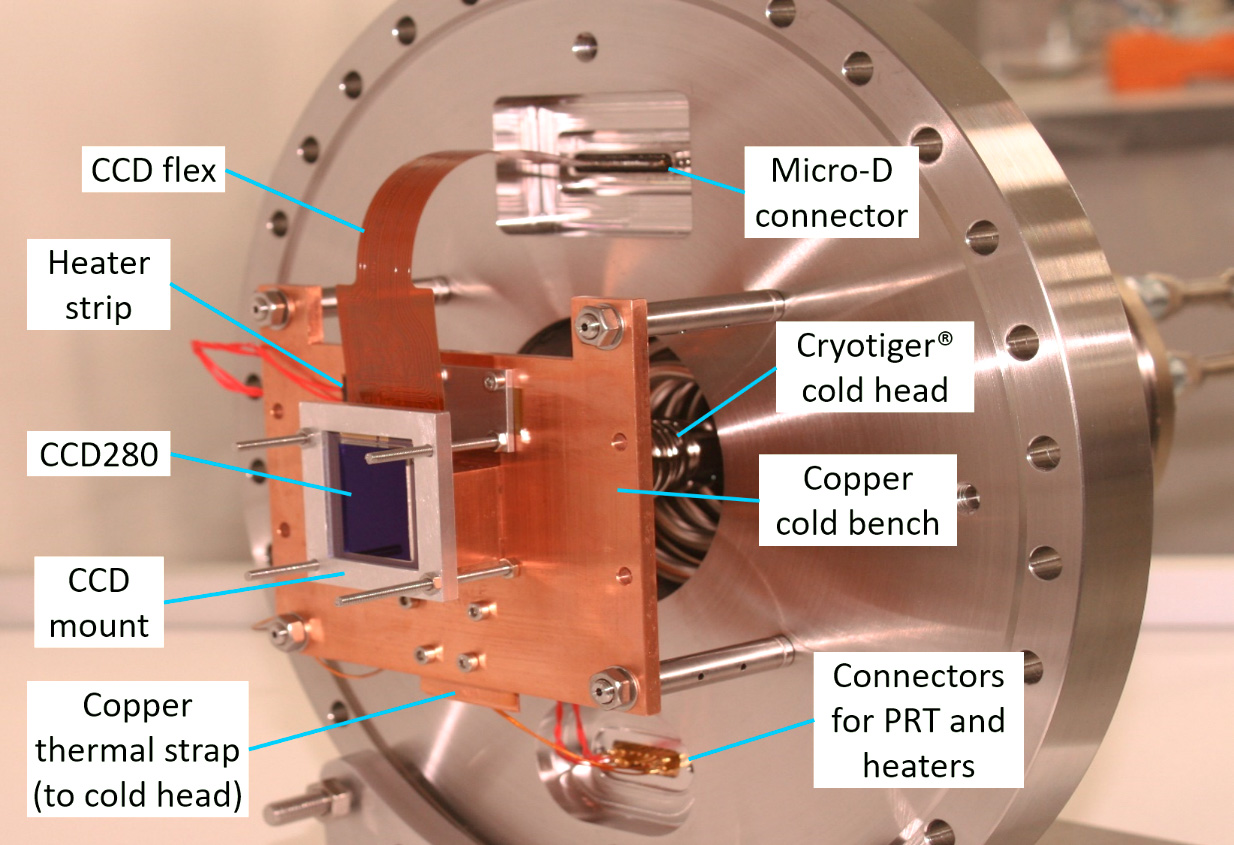 Data processing algorithms are being developed and tested for the on-board Event Detection Unit to identify soft X-rays observed in the images and reject background cosmic events.

Modelling of the scale and types of radiation effects incident on the CCDs due to the mission orbit and instrument design is ongoing.  This involves understanding the radiation background and its effect on images collected by the detectors. 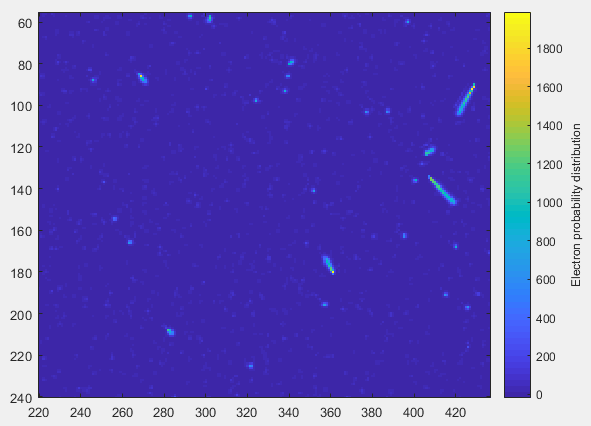 The CEI provides ongoing input into the design of CCDs.  This includes minimising CCD damage and instrument background by optimising the design of CCD radiation store shield that is in close proximity to the detectors.

The CCD flight models will undergo final testing prior to their integration in the SXI.

Previous X-ray astronomy missions such as XMM-Newton, Swift-XRT and Suzaku have all suffered damage due to micrometeoroid impacts. A study is being conducted into the likelihood of micrometeoroids impacting the CCDs over the mission lifetime and the effect that these impacts would have on the performance of the SXI.

The list below covers CEI publications to date concerning SMILE:

“How does the solar system work?”

A question which remains highest on the agenda for European space research. SMILE aims to contribute to this question in a unique way. Never attempted before, it will combine soft X-ray imaging of the Earth’s magnetopause and magnetospheric cusps whilst simultaneously imaging the Northern Aurora using ultraviolet and providing additional in situ measurements of the magnetic field and plasma.

More knowledge of the magnetosphere interaction zones and global auroral distributions are essential for our understanding of space weather. We are still unable to quantify the global effects of these drivers, including the conditions that prevail. SMILE will revolutionise magnetospheric physics using these state-of the-art detection techniques and will play a key role in developing our ability to model space weather.

Space weather can adversely affect performance and reliability of exposed instruments. The emergence of complex Earth and space based technologies poses ongoing challenges. Understanding space weather in more detail will help resolve more practical problems and is the key link in developing a complete understanding of how the Sun gives rise to and controls the Earths plasma environment.

1. What are the fundamental modes of the dayside solar wind/magnetosphere interaction?

The manner in which energy and plasma enters the magnetosphere is crucial to understanding and predicting how the magnetosphere will respond. SMILE will explore the phenomenon of magnetopause reconnection, and seek to determine when and where transient and steady reconnection states dominate.

2. What defines the substorm cycle?

3. How do Coronal Mass Ejections (CME) driven storms arise and what is their relationship to substorms?

Geomagnetic storms driven by coronal mass ejections (CME) represent a severe space weather threat. SMILE will study how and why CME-driven storms develop, and determine whether or not they are always separate phenomena, or can be considered as sequences of substorms. 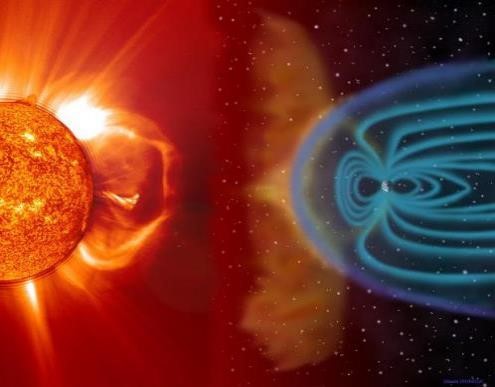 Recent discoveries have shown, that the outer magnetospheric boundaries can be imaged via the process of solar wind charge exchange (SWCX) X-ray emission. The interaction of solar wind ions with neutral atoms in the Earth’s exosphere produces characteristic soft X-ray lines, with intensities that peak in the cusps and dayside magnetosheath. SWCX emission can thus be used to image the boundaries that control/regulate the flow of solar wind mass and energy into the magnetosphere, and also provides information about the composition of the solar wind through the emission of X-ray spectral lines. The location, shape, and motion of the dayside magnetospheric boundaries, including the bow shock, magnetopause, and cusps will be observed through direct imaging and spectroscopy of these SWCX emissions. 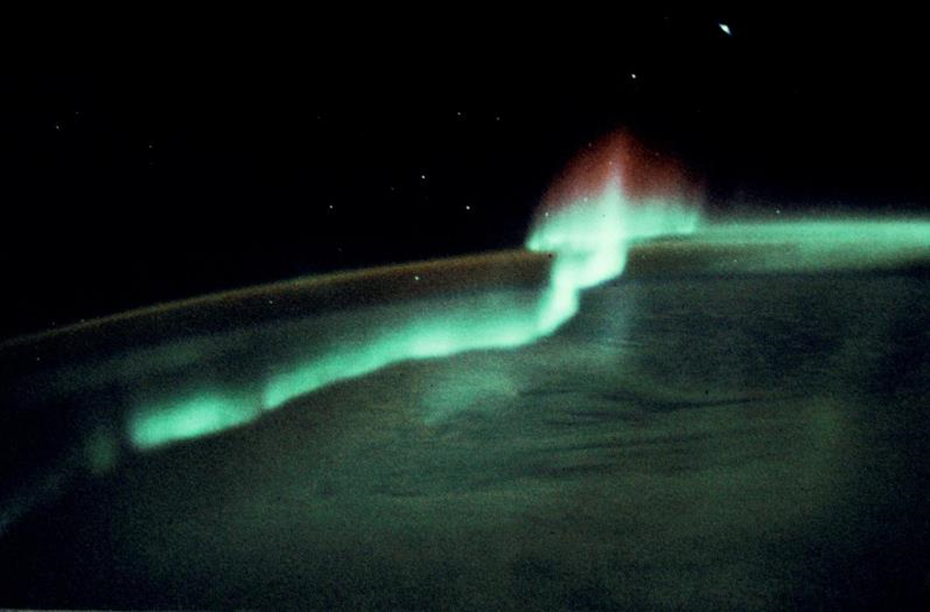 In parallel the location and width of the auroral oval, and the transient and localized brightenings that occur within and on the edges of the auroral oval will be observed. This information will be used to quantify the internal configuration of the magnetotail and lobes. This will help to elucidate the consequences of the dayside interactions observed by the soft X-ray imaging. SMILE is designed as a stand-alone mission that performs independent solar wind plasma and magnetic field measurements from its near-Earth vantage point, thereby obviating past concerns regarding the arrival times and spatial extent of solar wind features that arose in studies employing distant solar wind monitors. The key parameters to be measured include the solar wind magnetic field strength and orientation. 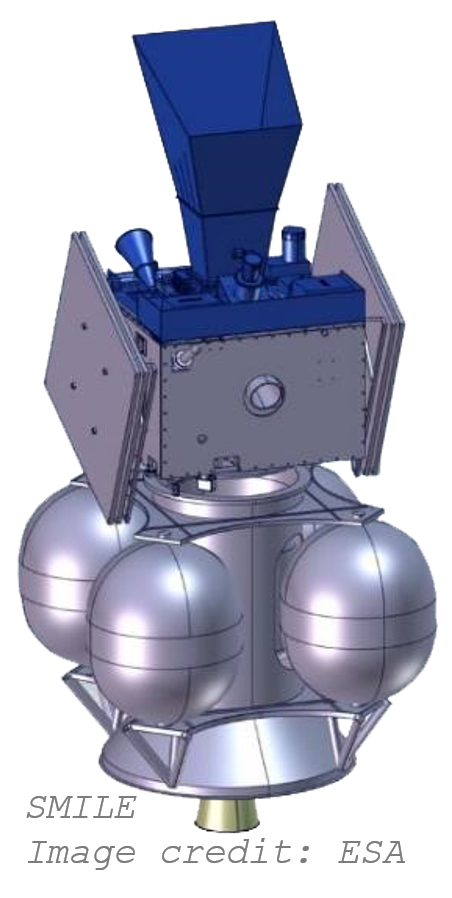 Radiation effects vary; considerations are made for the most harmful forms. For SMILE that is solar radiation. Solar flares and Coronal Mass Ejections (CMEs) send large amounts of high-energy protons and heavy-ions through space and can damage equipment. Two types of damage mechanisms can take place. Firstly is ‘lattice displacement’ - caused by primarily by high energy protons, electrons and heavy ions. These can alter the arrangement in the atomic lattice of structures leading to defects that can temporarily trap signal electrons, affecting readout of images. Ionising radiation, caused by gamma rays and charged particles that are not energetic enough to cause alterations in a crystal lattice, can lead to a shift in optimised voltage levels and increased dark current in CCDs.

SMILE will be exposed to considerable amounts of radiation throughout the planned orbit, including passage through the Van Allen Belts (particles trapped by the Earth’s magnetic field). CCDs are highly sensitive; displacement damage defects in the silicon crystal lattice can significantly affect the image quality if the properties of the defect are at a critical point relative to the way a CCD is operated. Small changes in the evolution of trap properties and the CCD operation can significantly improve imager performance.

Researchers at the CEI will be investigating the radiation environment in detail, and how the radiation interacts with the instrument shielding to damage the CCDs. Researchers at the CEI will investigate this in detail, for CCD and CMOS sensors. Assessments of radiation damage, including irradiation of the sensors to a predicted end of life dose. Results of these tests will be carefully studied to better understand key performance limitations. This will ensure that equipment is radiation hardened and ready for launch. It is a top priority of the CEI to ensure that optimum performance is maintained throughout the 3-year mission.

In order to achieve the scientific objectives the SMILE payload comprises of two imaging instruments and an in-situ measurement package containing a further two devices.  These instruments are described below: 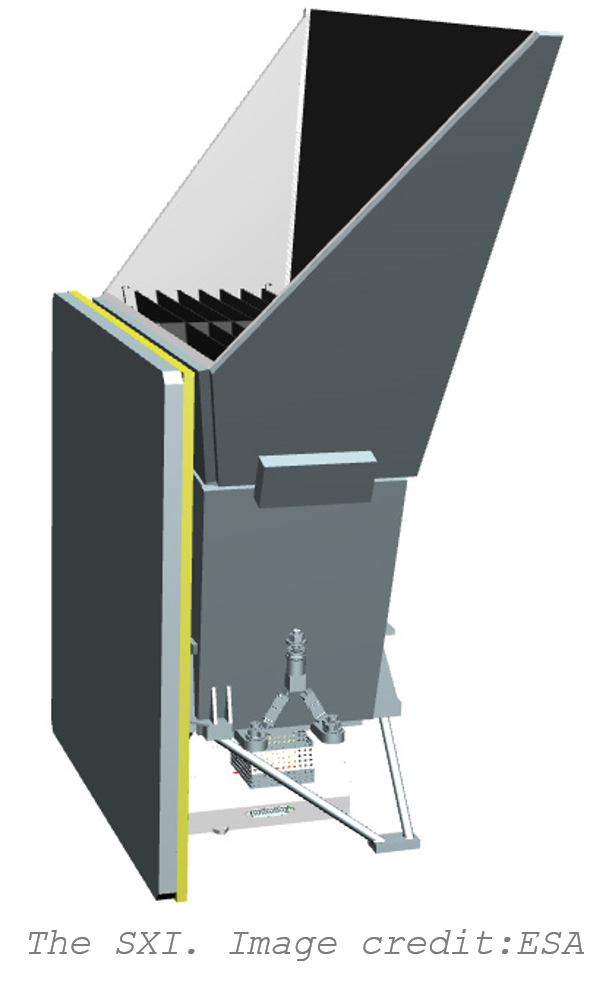 SMILE’s Soft X-ray Imager (SXI) is being led by the University of Leicester with contributions from other institutions in the UK and overseas, including the Open University.  SXI will take spectral images of the Earth’s magnetosphere which will enable researchers to observe the dynamical properties of the dayside magnetospheric boundaries within the soft X-ray range, between 0.2 and 5 keV.

At the forward facing end of the instrument is a baffle that works similarly to a lens hood for commercial cameras by preventing stray light from entering the focal plane.

The focus of the SXI camera is to take images of the dayside solar wind-magnetosphere interactions from the conditions prevailing at the Earth’s bow shock, magnetopause and cusps. At the heart of the instrument are two, back illuminated CCDs.

CCDs are silicon-based semiconductors that have integrated circuits constructed into the surface. They consist of pixels represented by p-doped metal-oxide-semiconductors (MOS) capacitors. Semiconductors are useful as they operate by converting incident photons into an electrical charge by liberating electrons; a phenomenon known as the photoelectric effect. Optical photons produce a single electron inside the semiconductor which is then collected by a pixel to be read out as part of the image. X-ray photons tend to generate clouds of electrons when they interact in a pixel, and so the signal from a single X-ray can be collected by a number of neighbouring pixels. 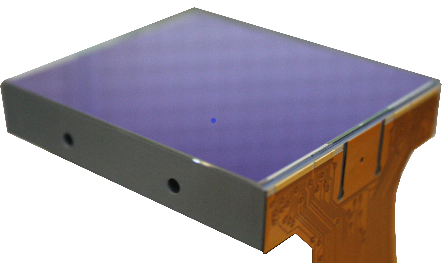 CCDs are particularly useful in astronomical imaging as they are very sensitive. Light is projected onto a pixel array, generating electron signal which is accumulated in the pixels close to where they were incident on the CCD. The pixels (capacitors) accumulate charge for the exposure time until the charge is transferred via a read-out register into a charge amplifier, which converts it into voltage. This process is repeated until the entire image becomes a sequence of voltages which is then digitised by a converter and stored. 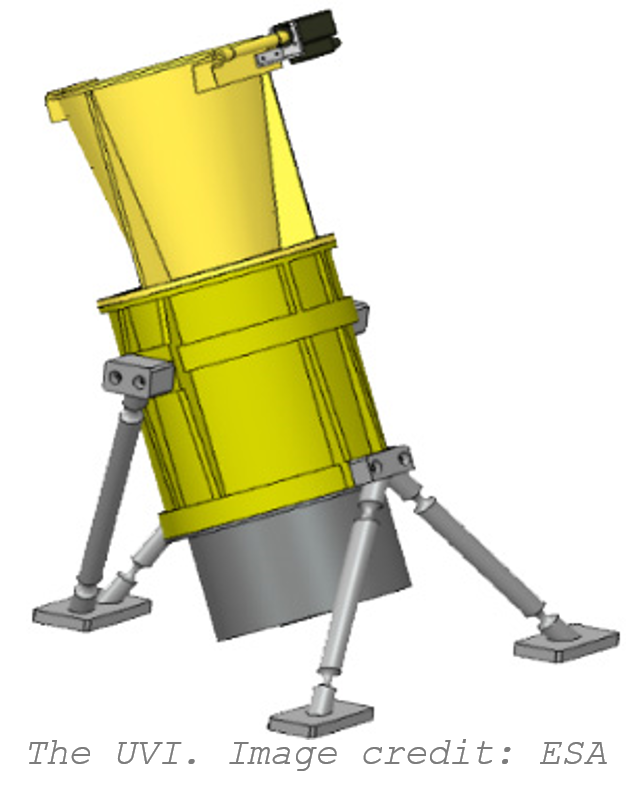 SMILE is also equipped with the high heritage Ultra-Violet Imager (UVI) - developed by the University of Calgary and Honeywell Aerospace, with contributions from Belgium and China. UVI will monitor the Earth’s Northern Aurora, which is a consequence of solar wind injection into the magnetosphere. Dayside interactions will be observed alongside SXI where global auroral images will be captured from one hemisphere.

A question which remains highest on the agenda for European space research. SMILE aims to contribute to this question in a unique way. Never attempted before, it will combine soft X-ray imaging of the Earth’s magnetopause and magnetospheric cusps whilst simultaneously imaging the Northern Aurora using ultraviolet.

SMILE is a novel self-standing mission with the aim of measuring the global interactions between the Earth’s magnetosphere and highly energetic solar winds.

More knowledge of the magnetosphere interaction zones and global auroral distributions are essential for our understanding of space weather. We are still unable to quantify the global effects of these drivers, including the conditions that prevail. SMILE will revolutionise magnetospheric physics using these state-of the-art detection techniques and will play a key role in developing our ability to model space weather.

Space weather can adversely affect performance and reliability of exposed instruments. The emergence of complex Earth and space based technologies poses ongoing challenges. Understanding space weather in more detail will help resolve more practical problems and is the key link in developing a complete understanding of how the Sun gives rise to and controls the Earths plasma environment.

The Magnetometer: MAG – Also developed by NSC in China. This instrument will establish the orientation and magnitude of the magnetic field produced by solar winds. This data is paramount for understanding the imaging data obtained by SXI and UVI.

The Light Ion Analyser: LIA – Developed by the National Space Centre (NSC) in China. LIA will determine aspects of the solar wind, such as density, temperature, velocity and heat flux under various solar wind conditions.