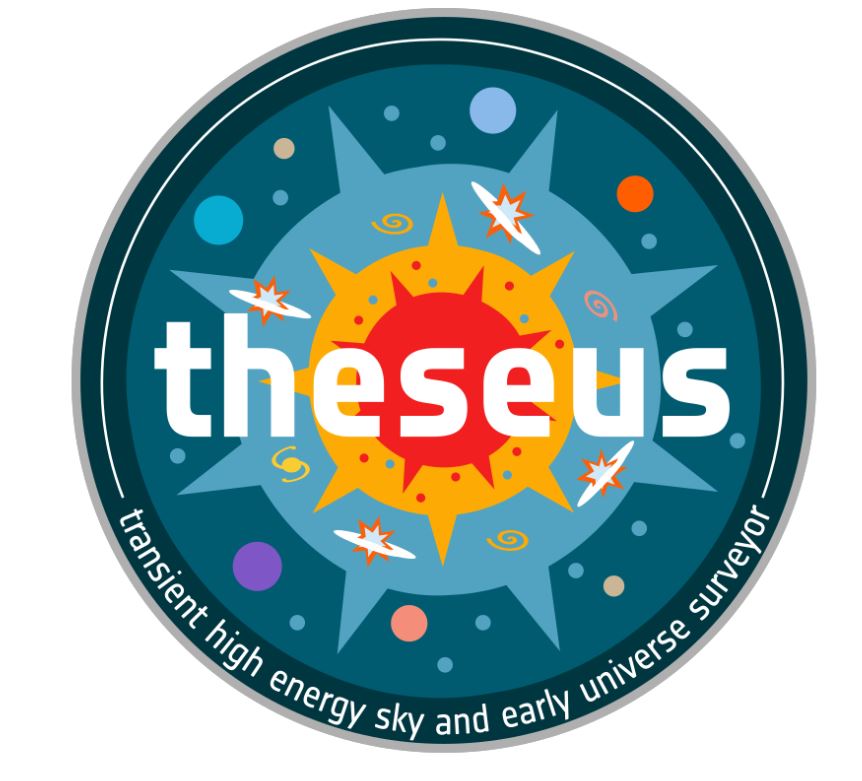 THESEUS (Transient High Energy Sky and Early Universe Surveyor) is one of the three pre-selected space telescopes for the M5 mission of the European Space Agency’s Cosmic Vision Programme [1-3]. The concept is currently in an assessment phase study and the selected M5 mission will be announced in 2021 for an expected launch in 2032. The figure at the end of this page details the study of long gamma-ray bursts in the cosmological context (figure adapted from the NASA/WMAP team for [3])

The mission will aim to explore the Early Universe up to redshift »10 from the observation of the Gamma-Ray Burst (GRB) population in the first Billion years, and to monitor the X-ray transient Universe. The instrumentation payload will be composed of a Soft X-ray Imager (SXI), an InfraRed Telescope (IRT), and an X-Gamma rays Imaging Spectrometer (XGIS).

The Centre for Electronic Imaging is part of the UK-led consortium to develop the SXI instrument that will be composed of four telescopes using micro-pore optics to achieve an overall field of view of 1 sr for X-ray energies between 300 eV and 5 keV. The focal plane of each telescope has a 16x16 cm² cooled detector area. 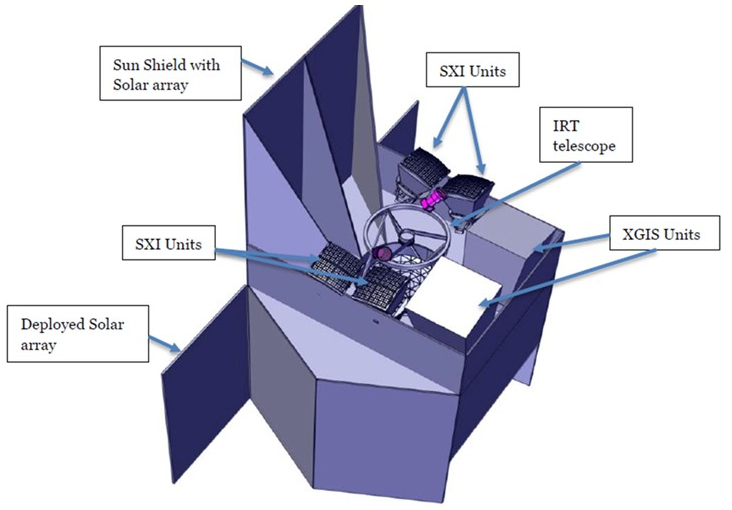 The current state-of-the-art detector for such instrument is a CCD (as in SMILE [4]), but the limited radiator accommodation on the spacecraft and overall thermal design limits the cooling capacity at the focal planes, so that optimum temperature for CCDs (usually around -100 °C) cannot be reached. Therefore, the development of a suitable CMOS Image Sensor (CIS), capable of similar performance to a CCD but with better radiation hardness at higher operating temperatures (approximatively -40 °C) has been proposed.

The figure shows a sketch of the THESEUS spacecraft that details the location of the instruments. (Credits: ESA) 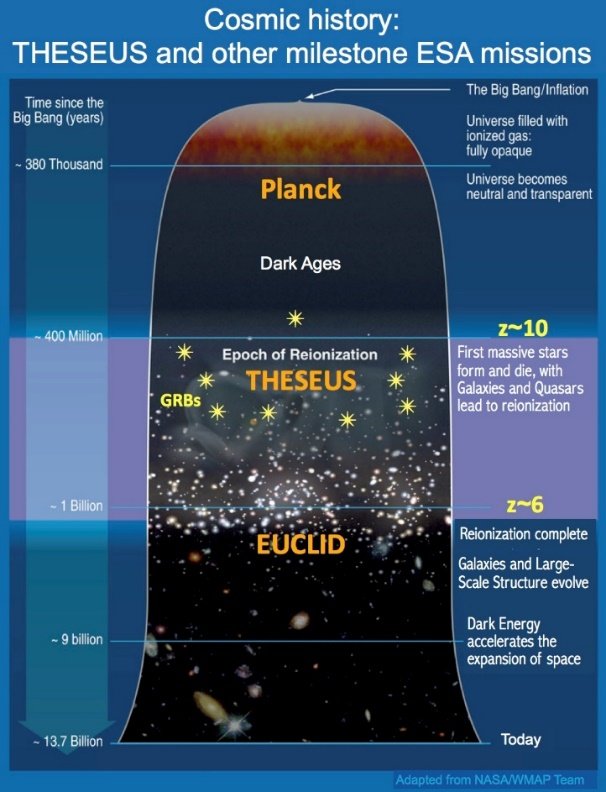 The team at the Centre for Electronic Imaging are developing and testing a specialised CMOS Image Sensor to demonstrate that this new technology can surpass the requirements of the instrument. The prototype uses pixel designs developed at the Open University that have been optimised using 3D models and performance simulations for the best soft X-ray detection performance. The pixel design is then integrated into the Teledyne-e2v digital CMOS platform [5, 6] to produce a prototype sensor with a 2 x 2 cm² sensitive area. The final pixel design will allow full depletion over depth of 40 µm for optimal soft X-ray quantum efficiency and instrument background suppression and will be capable of an unprecedented near-Fano-limited spectral resolution that will also be of prime interest for synchrotron and FEL applications.

The fabricated prototype sensors will be fully characterised to ensure that the requirements are satisfied. This phase will include electro-optical characterisation, soft X-ray quantum efficiency measurements as well as radiation hardness assessment using protons, gamma rays, and heavy ions.

To understand the radiation environment, the CEI are also responsible for modelling the space radiation environmental effects on the Soft X-ray Imager detectors, as influenced by the spacecraft orbit, and designs of the detector focal plane, instrument shielding, and spacecraft arrangement. This further builds on expertise developed in the CEI on the SMILE and ATHENA projects.