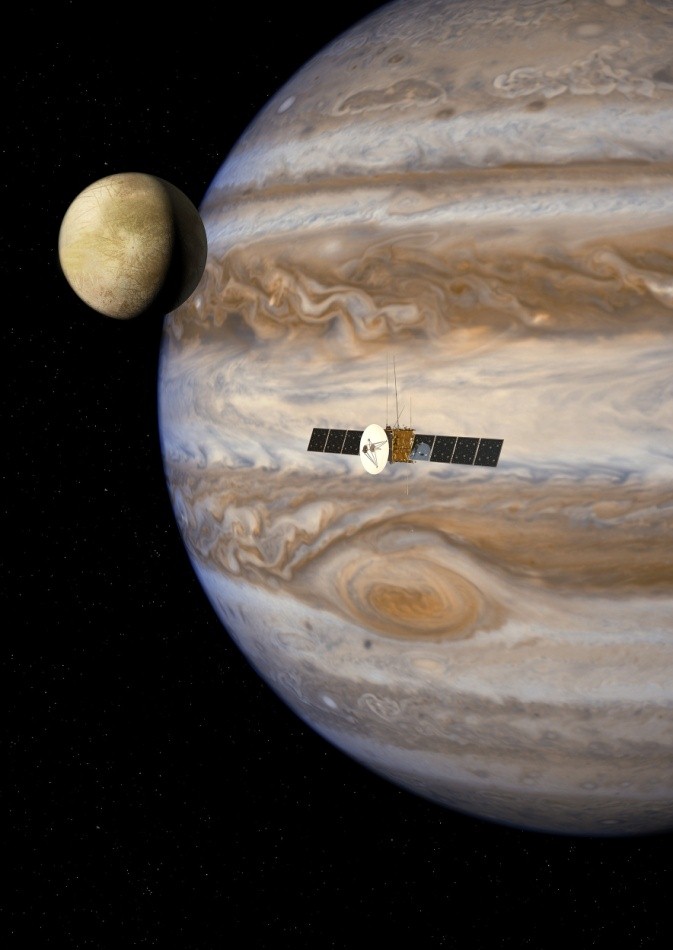 The JUpiter ICy moon Explorer (JUICE) is an L-class ESA funded mission, which is planned to launch in 2022 and will arrive at Jupiter in 2030 It is part of the ESA Cosmic Vision program, and will address two of the key scientific questions; “What are the conditions for planet formation and the emergence of life?” and “How does the Solar System work?”.

JUICE will spend over 3 years remotely exploring Jupiter and its icy moons; Europa, Ganymede and Callisto. Liquid water is believed to present below the surface of the icy moons, so a key aspect of the mission is the search for habitability and identifying locations for future missions. In addition, JUICE will study Jupiter's atmosphere and magnetosphere, and the interaction of the Galilean moons with the gas giant planet. Onboard instruments will include camera systems, a geophysical package, and magnetometer.

The CEI are responsible for the CMOS imaging sensor to be used on the JANUS optical camera system, the CIS115 from Teledyne e2v. The CEI’s involvement includes characterisation, test and calibration of the devices. In addition, CEI will perform an extensive investigation into the effects of radiation damage to the detector by both test and modelling. Science activities will shape the instrument definition, goals and data analysis and build the foundation for future science exploitation. 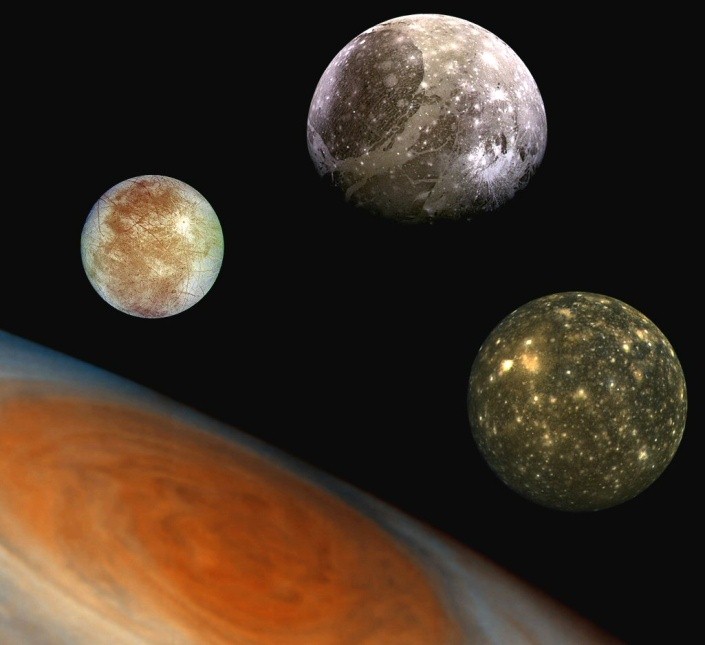 Three of Jupiter‘s Galilean moons (Europa, Ganymede, and Callisto) are believed to contain liquid oceans beneath their icy surface that may be suitable habitats for life. JUICE will study the moons, particularly looking at the key parameters that are generally accepted as being required for habitability (the presence of water and essential elements, a stable environment, and an energy source).

The moons’ thermal and chemical cycling, tectonic activity, and subsurface ocean environments are some of the areas of interest. 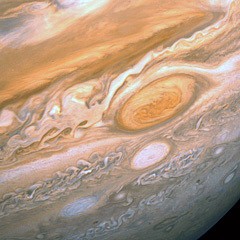 The structure, dynamics, composition, chemistry and magnetosphere of Jupiter’s atmosphere will be studied to investigate the evolving weather systems and mechanisms that transport energy, momentum and material between the different layers.

One of the mission aims is to add to our understanding of the origin and evolution of the gas giants and the formation of their moons. Studying the interaction of Jupiter with the Galilean satellites will further enhance our knowledge of the evolution and dynamics of the Jovian system.

The JUICE mission will spend the first two and a half years touring the Jovian system, using gravity assistance from Callisto and Ganymede to reduce the mission’s fuel requirements. During its flybys of the moons and Jupiter JUICE will make detailed observations using its suite of scientific instruments. During initial flybys of Europa, the focus will be on studying the composition of its non water-ice material, and undertaking the first subsurface sounding of an icy moon. This will be followed by 6 months of orbiting around Ganymede, starting with a 5000 km altitude elliptical orbit, followed by a 500 km circular orbit, and finally to 200 km orbit. During the flybys the JUICE’s optical camera will take images over a wide area, and up to a 7.5 m/pixel spatial resolution for targeted areas. 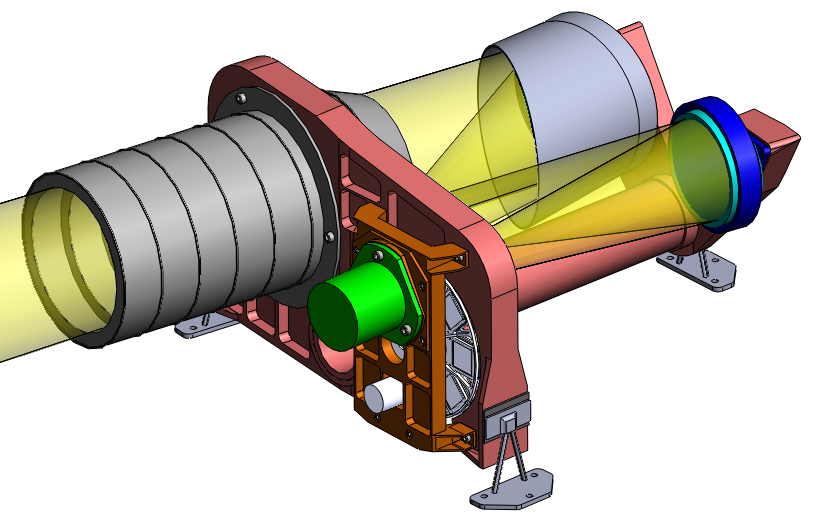 The JANUS (Jovis, Amorum ac Natorum Undique Scrutator) optical camera system will image the moons to high resolution in order to characterise their surface features, investigating evidence of tectonics, impacts, volcanic activity, erosion and regional surface ages. The atmosphere of Jupiter will also be studied, including observations of the polar regions and lightning.

The JANUS camera uses a Three Mirror Anastigmat optical design for its telescope, providing both high-resolution and a wide field-of-view performance levels. A filter wheel containing 14 broad and narrow band filters is placed in the optical path will be used to provide images across a range of wavelengths, giving the camera colour sensitivity.

The surfaces of Ganymede and Callisto will observed at better than 400 m/pixel resolution, and selected areas will be imaged with spatial resolution from 25 m/pixel down to 3 m/pixel. Stereo imaging is also possible by mapping the same area of a moon from different observation angles during multiple fly-bys. 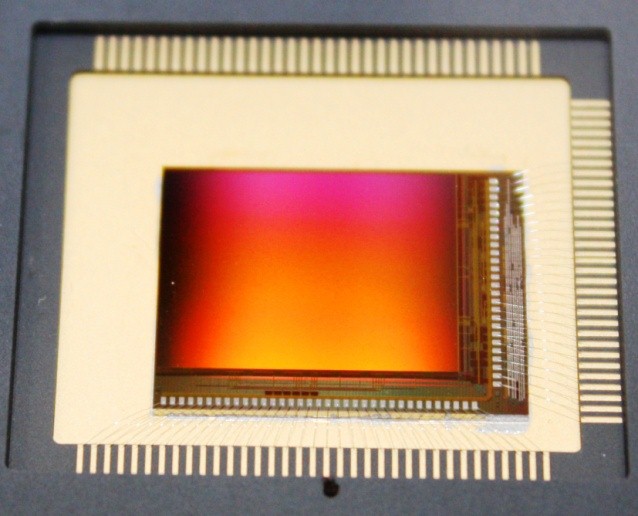 The CIS115 CMOS sensor is the second generation of an evaluation sensor, the CIS107. It is a back side illuminated detector with 4 parallel outputs. It has 1504 × 2000 pixels, each measuring 7 square microns.

A full range of characterisation tests are being carried out, including charge capacity, light level sensitivity and spatial resolution using a specially commissioned optical test bench. The optical bench contains a set of masks including a test pattern, slits and pin-holes that demagnified and focussed onto the detector in order to observe how a known feature size and shape is recorded by the detector. 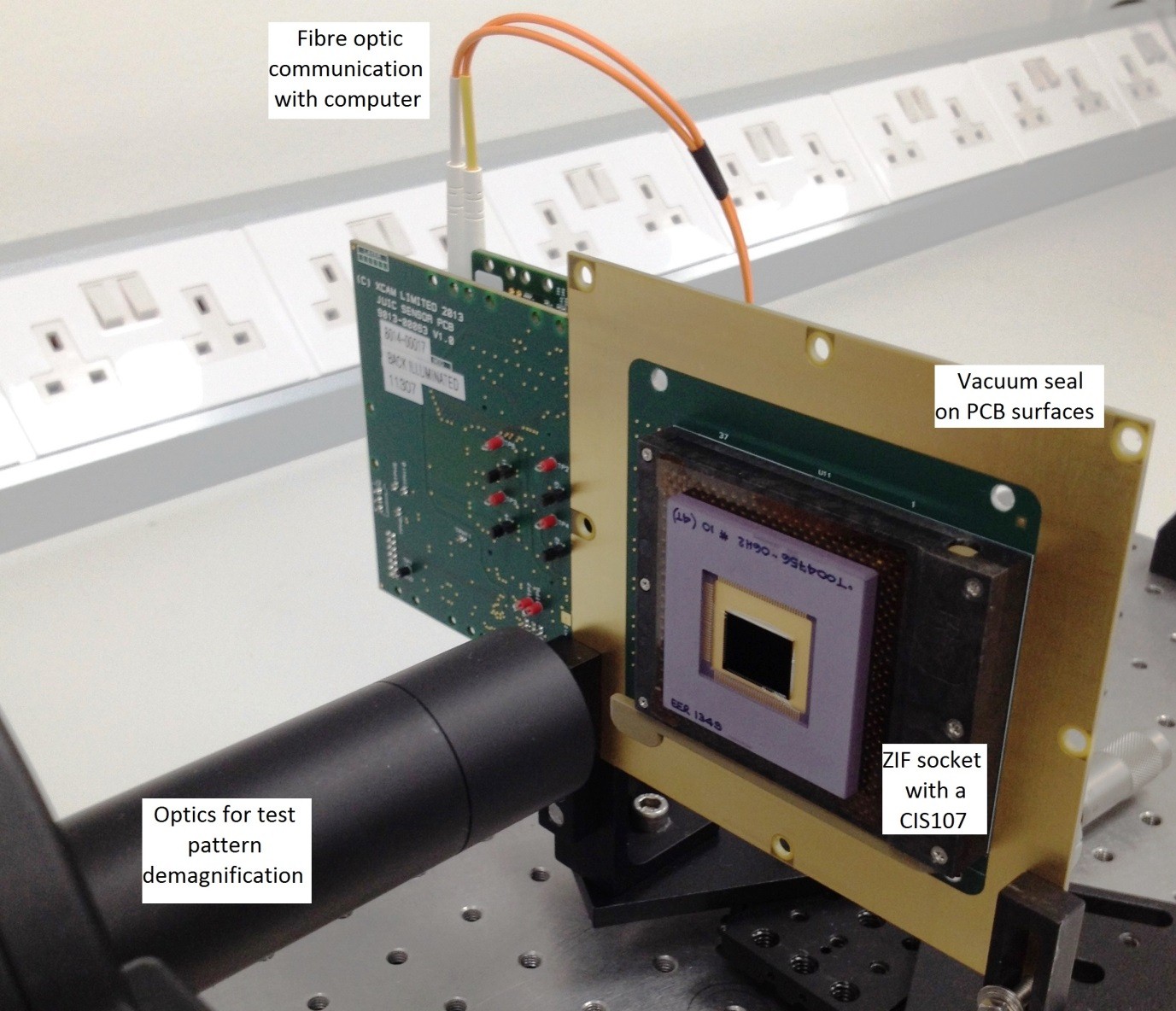 Jupiter’s strong magnetic field traps energetic particles that form belts around the planet. In additional to the Jovian radiation belts, solar and cosmic radiation will damage sensitive optical and electronic components in the spacecraft. The radiation damage to components will significantly reduce the performance of some elements, or could stop instruments working completely, therefore the radiation environment must be carefully predicted and the design of spacecraft instruments and components must be carefully considered to ensure they will survive and perform well until the end of the mission. Radiation damage is particularly a problem for the sensor in JANUS, as the image quality will degrade later in the mission as sensor becomes more damaged. As such, understanding how radiation damage affects the performance of the detector is vital to the scientific success of the instrument. The CEI will undertake radiation damage assessments including irradiation of the sensors to the predicted end of life dose of electrons, protons, gamma irradiation, and heavy ions. The change in sensor performance following radiation will be carefully studied to understand the change expected and offer schemes to mitigate any reduction in performance due to the damage.

In addition to the damage caused to the sensor, the background radiation may be directly observed in images taken during the mission. In particular, the effect of background radiation electrons on the image quality during the science phases is being modelled using the GEANT4 software package. This work will be supplemented by measurements using a lab-based electron source and during the electron irradiation tests.