The Off-Plane Grating Rocket Experiment (OGRE) aims to increase the technology readiness levels of three components by testing them on a sounding rocket, encouraging their use for future missions to investigate some theories regarding the universe's missing baryonic matter. Some theories believe that this matter could be residing in intergalactic filaments known as the Warm-Hot Intergalactic Medium (WHIM), and by using distant X-ray sources such as Active Galactic Nuclei (AGN), it should be possible to detect this matter through its strong absorption in the soft X-ray regime. Current X-ray telescopes are limited when it comes to imaging at these wavelengths and so new techniques are required.  The three components OGRE will be validating consist of a new light-weight silicon mirror design, off-plane reflection gratings, and the use of Electron Multiplying CCDs to capture soft X-rays. Each of these components have been previously reviewed with OGRE being the first project to utilise them in a space mission by collecting data of the quadruple star system Capella, one of the brightest X-ray sources in the sky. 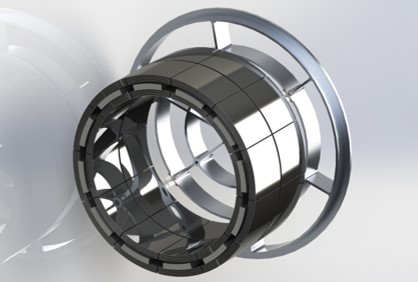 Traditionally, X-ray telescope mirrors were manufactured from glass, which was ground and polished to the correct shape, and then coated with gold or iridium. These mirror assemblies are often very heavy and require a complex support structure due to the large number of mirror segments required. OGRE’s mirror optic will be utilising the techniques of the semiconductor industry to instead produce mirrors out of silicon. A mirror segment will start out as a single large crystal of silicon in much the same way most semiconductor devices do. This crystal is then cut, ground and polished down to a thin sliver with the appropriate optical geometry and again coated with gold or iridium. The segments themselves are much lighter than their glass counterparts, but they can also be produced in larger sizes, requiring fewer segments to complete a mirror, and thus simplifying the support structure and further reducing the weight of the overall package. The mirror optic is being developed by Goddard Space Flight Center.

To create and record an X-ray spectrum, OGRE will use a set of off-plane reflection gratings to diffract the collected X-ray light into its component wavelengths. Transmission gratings typically have lower mass and are less sensitive to misalignments during assembly, however reflection gratings have higher efficiency, and can be ‘blazed’ (i.e. the grooves are slanted in one direction) for increased spectral dispersion and favouring of higher orders of diffraction. These features are desirable due to OGRE’s short observation window and restricted telescope length due to launch vehicle limitations. The gratings are positioned in the ‘extreme off-plane’ mount, which means the grooves are roughly parallel to the incoming X-rays. Compared to in-plane gratings, this increases efficiency as the entirety of each groove is illuminated, and the effects of imperfect manufacturing of the grooves are reduced. The reflection grating array is being developed by Penn State University. 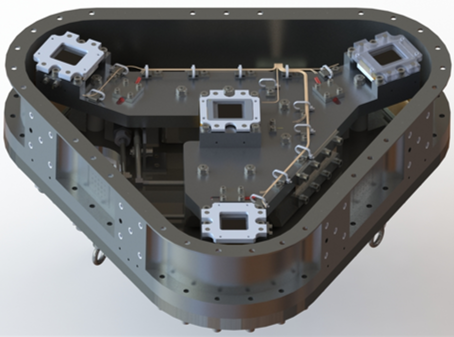 Finally, OGRE will use four Teledyne e2v CCD207-40s for its camera system. These are Electron Multiplying CCDs (EMCCDs) that are able to greatly amplify the signal in each pixel before the pixels are read out, which effectively reduces the amount of noise generated by the readout electronics relative to the signal, or in other words, increases the signal-to-noise ratio. The camera will be evacuated and cooled to -100°C during flight, and the images from each CCD will be handled by a dedicated BeagleBone Black (BBB), which will detect X-ray events in the images and downlink a limited amount of data to the ground in real time. The camera is being designed and built by XCAM Ltd., while the CEI is responsible for characterising and optimising the detectors and programming the four BBBs.

The current launch window for OGRE starts in October 2021 and lasts until March 2022. A Black Brant IX sounding rocket will carry it on a suborbital trajectory offering an observation window of ~5 minutes before it returns to Earth. If successful, it will produce the highest resolution X-ray spectrum of Capella to date and demonstrate the readiness of these three technologies for use on later high-budget missions.