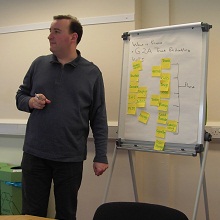 David Worsley is the Risk & Value Manager for Network Rail's London North Eastern Route, and is also a Visiting Lecturer at the Centre for Railway Research at Newcastle University. He has a Diploma in Statistics, Certificate in Mathematics, and a Certificate in Quantitative Studies for Business from the Open University.

Why did you decide to study with the OU?

I did maths A-Level, but I don’t think the real-world applications were properly explained at school, so I didn’t study any maths for almost 15 years. Ten years ago, I was working in the railway industry, and I was given a job as a project risk analyst, based partly on the little maths that I did know. I realised that in order to pursue that career fully I would need to expand my knowledge of statistics in particular, so I undertook the Certificate in Quantitative Studies for Business, Certificate in Mathematics, and Diploma in Statistics at the OU. I did enough maths in these three qualifications to be eligible for full membership of the Institute of Mathematics and Its Applications, which I obtained in 2010.

Describe your experience of studying for your OU qualifications.

The period during which I was studying mathematics with the Open University was very demanding, as I was adjusting to a new job and undertaking a professional qualification with the Institute of Risk Management at the same time. My employer gave me study leave and paid for that course, but I did the OU qualifications in my own time and at my own expense; the incentive that kept me going was the realisation that after three years of hard work I would be qualified in both the managerial and mathematical aspects of my new profession, and thereby in a very strong position to progress in the rail industry.

What made my success possible was the high standard of tuition I received at the OU; a two-hour tutorial from each tutor seemed to impart as much knowledge as days of reading alone. I found myself travelling to adjacent regions when possible in order to benefit from additional tutorials, and I attended the OU mathematics revision weekend at Aston University.

What have you done since you finished studying?

Shortly after completing the Diploma in Statistics, I moved to a job in strategic planning at Network Rail, and I eventually rose to be responsible for long-term planning of the East Coast Main Line. I thus had the opportunity to use maths in cost estimating, demand forecasting, economic modelling, and strategic decision analysis; in particular, all of these applications were used by the committee that chose the locations for the stations on High Speed 2, on which I represented Network Rail’s interests. I was once even involved in an engineering simulation project, examining the perennial problem of “leaves on the line”, in which I used techniques that I had learnt on an OU probability course.

I’m back working in project risk management again now, but in a more senior role which has allowed me to help expand the responsibilities of the department to include the complicated statistical analysis required for whole-life cost modelling of new assets. Network Rail intends that this initiative will save the taxpayer over £3 billion in costs over the next 20 years. I also teach many of these applications of mathematics as a Visiting Lecturer at Newcastle University’s Centre for Railway Research, and in this capacity I have been nominated to take part in a European Union funded project that will share this knowledge at a series of conferences across the continent over the next 3 years.

How have your OU qualifications helped your career?

The effort that I put in to studying at the OU in my mid-30s in order to become a qualified mathematician meant that as I turned 40 my career really accelerated, and I now have the opportunity to make a contribution to the railway industry at an international level. As mathematics underlies both risk analysis and many of the tools used in strategic planning, I have been able to make an impact in two professional fields, and I’m now enjoying teaching what I have learnt at University level myself.

What advice would you offer to a prospective student considering study at the OU?

The first suggestion that I would make is that new students plan their studies so that they can pick up intermediate qualifications on their path to a full degree; the prospect of earning certificates or diplomas along the way should make the potential six-year study period seem more digestible. You can also experience a sense of achievement when each qualification is gained, which helps to motivate you for future efforts.

Meanwhile, my main advice would be to take full advantage of tutorials; the opportunity to interact with your tutor and really concentrate on what you are being taught can often make difficult mathematical topics suddenly become comprehensible. 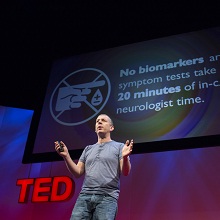 Max Little is a lecturer and Wellcome Trust-MIT Fellow in the Nonlinearity and Complexity Research Group at Aston University,a Visiting Assistant Professor at MIT and Founder and Chief Scientific Officer at NumericAnalysis Ltd consulting. He has a B.Sc. in mathematical sciences from the OU, as well as a D.Phil. in Applied Mathematics from the University of Oxford.

Why did you decide to study with the OU?

Working in video games on DSP algorithm development I became fascinated by the control that mathematical modelling could provide. This triggered an understanding that mathematics could be both very powerful in practice and intrinsically beautiful. You could say I caught the 'maths bug'!

Describe your experience of studying for your OU qualifications

It was certainly not easy studying at the same time as holding down a demanding full-time job, and I didn't make it easy on myself by choosing to study well over my recommended number of annual credits! But, the extremely well-organized OU material and study plans made it possible for me to achieve a high first-class result, which impressed Oxford enough to allow me to go on to study a D.Phil. there. The support of excellent OU tutors was incredibly helpful in achieving this.

What have you done since you finished studying?

It's been a long road! I finished up my D.Phil. at Oxford in 2007 and since then I have held a number of postdoc and consulting jobs on a variety of topics, including systems biology and rainfall prediction at Oxford and MIT in the US. I have also made many contributions to mathematical and statistical algorithms for analyzing behavioural signals such as voice and accelerometry in neurological disorders. I'm now a mathematics lecturer at Aston.

How have your OU qualifications helped your career?

The OU allowed me to change careers by giving me the opportunity to study my passion - mathematics - while earning a living. After postdoc positions in Oxford and co-founding a web-based image search business, I won a Wellcome Trust fellowship at MIT to follow up on my doctoral research work in biomedical signal processing. I am currently a Lecturer in Complex Systems, Pattern Analysis and Information Mathematics at Aston University, a Wellcome Trust-MIT Postdoctoral Research Fellow, a Visiting Assistant Professor at MIT and Founder and Chief Scientific Officer, NumericAnalysis Ltd consulting.

What advice would you offer to a prospective student considering study at the OU?

Be ambitious, but realistic: ensure that you have good plans in place in order to hit the strict and quite numerous deadlines. Try to explore the subject as much as you can; mathematics is learned by doing not by passively absorbing information.