Unlike electric charge however, spin and magnetic moment direction are not usually conserved when a electron flows through a solid material. In fact the material must be near atomically perfect with a very low density of impurities and defects in order for spin direction to be conserved, even over microscopic distances. For this reason, until recently, every commercial electronic device ever built has ignored electron spin and magnetic moments, and instead relied solely on the charge of the electron for their operation.

In the last two decades however, it has become possible to manufacture materials in which spin direction is conserved, and this has given rise to a new field of study called spintronics (meaning "spin transport electronics") : an emerging multidisciplinary field which attempts to exploit both the spin, magnetic moment and charge of the electron.

The first commercial spintronic device to utilise the spin of an electron rather than its charge is the reading head inside a modern-day hard disk. The development of this technology can be partly attributed to a 2001 publication [1] co-authored by Dr Andrey Umerski of the Department of Mathematics at The Open University. 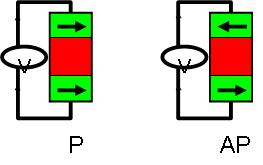 It turns out, that if the spin direction of electrons flowing through the junction is conserved, then the resistance of the AP state can different from the P state: $$ R_{AP} \neq R_p $$. This is effect is called magnetoresistance, and it is characterised by a quantity called the magnetoresistance ratio (MRR) - the percentage change in resistance between the P and AP state:

A read head composed of a junction with a large MR ratio is more desirable, since it can read smaller magnetic 'bits' on the hard disk, and hence a higher storage density.

In 1989 an MR which utilises the spin of the electron was discovered in an all metallic junction, by Albert Fert and Peter Grünberg, who later received the 2007 Nobel Prize for their finding. This discovery was quickly developed commercially and, in 1997, IBM brought out the first hard disk drive in which the read head used this effect. By the late 1990s, all hard disk read heads were based on this technology, leading to a huge increase in disk storage density from 0.1 to 100Gbit/in2 between 1991 and 2003.

In 2001 Andrey Umerski of the Open University and his colleague George Mathon of City University, performed calculations on an entirely new system using an insulator, magnesium oxide (MgO), as the non-magnetic junction material. The underlying physics in this MgO junction relies on coherent spin-dependent, quantum electron tunneling through the MgO insulator, and is quite different to that considered by Fert and Grünberg. Their calculations [1] predicted that the MR ratio of this novel tunneling device can be over 15 times higher than previously achieved.

The commercial implications of this prediction were obvious, and the race to observe this effect experimentally ended in a dead heat in 2004 when a group based in Japan and a group at IBM in the US simultaneously reported very large MR ratios in MgO junctions [2, 3]. The motivation then moved to creating a commercial product. The first MgO read head reached the market in 2007 and since 2009 all new hard disks have been based on MgO junctions and have remained so.

The role of MgO junctions does not end with hard disk read heads. Currently they are being developed as the basis for a magnetic random access memory (MRAM), a new type of non-volatile memory that is being actively developed and may someday replace both hard disks and existing random access memory [4]. Furthermore, experimentalists and theorists are currently working on and developing a range of other spintronic devices including, spin based transitors and logic gates that use electron spin for information processing. Such devices may work with virtually no applied current, superseding present-day electronic technology and might hopefully provide a basis for scalable quantum computers.

The importance of spintronics to both pure science and to the development of the modern world was acknowledged by awarding the 2007 Nobel Prize for physics to two of its founders, Albert Fert and Peter Grünberg. More recently the highly prestigious 2014 Millennium Technology Prize was awarded to Stuart Parkin for his work on the development of spintronic hard-disk read heads including MgO based tunneling junctions [Ref. 3,5].