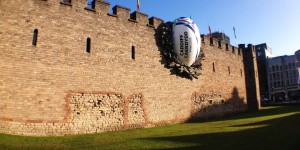 Last week I drew attention – not that it needed drawing – to the way Japan spurned the offer of a kick at goal to draw a match against South Africa with the final whistle about to blow.

It worked perfectly for them. They went on to score a try and make the biggest rugby headlines ever and more admirers amongst neutral rugby fans than probably any other national side in the World Cup.

Last weekend, another team were three points behind with just minutes left on the clock. The referee blew for a penalty. They had a metronomically accurate kicker who hadn’t looked remotely like missing anything all night. Three points and a draw were there for the taking – a formality, a foregone conclusion.

Just like Japan, they spurned the kick and went for touch.

The team of course was the host team, England. The opposition was Wales. Now, putting aside for the moment my unfettered delight at the result and the way in which it was achieved, I couldn’t help but be fascinated by the way in which the same decision at pretty much the same point in two matches had such dramatically contrasting consequences. I wonder how much of it was to do with the effect the decision had on the opposition.

When South Africa gave away their penalty, they were certain that they had thrown away their narrow victory and would have to put up with a draw. No other eventuality crossed their minds at that point. Japan had played out of their skins, yes, but after all there was a certain world order and Japan would respect that and be grateful beyond their wildest expectations for a share of the spoils. When Japan kicked for touch, it hit home very directly that Japan believed they could win and that belief of Japan’s had an intimidating effect on the Springboks because they hadn’t for one moment seen it coming.

When Chris Robshaw turned down a definite draw and ordered Farrell to go for the touchline, Wales must have been delighted. Rather than wonder like the Boks what on earth was going on, the Welsh reaction would have been more like,

Not long before that penalty, Wales had lost another three backs to injury to take their total to six, and in the face of that cruel depletion had scored a try where a scrum-half playing on the wing had cross-kicked to give the other scrum-half a chance to pick up and score. Which he did.

For probably the first time in the match, Wales were full of themselves. The men on the field were defying the odds of cruel injury and a chariot-ridden Twickenham, and believed that they could do it.

It was absolutely the wrong time to challenge them to defend a try. They would have died rather than concede.

Two almost identical decisions on what to do with a last-minute penalty. One spot-on. The other so very wrong.