From the age of 16 Amanda Halifax dreamt of becoming a PE teacher, however, instead of being able to pursue her dreams after school, she had to go out to work. Taking on any jobs just so that she could pay her bills, at one point Amanda found herself having to work 3 jobs as she needed the money. The day that Amanda dropped off her youngest child at university she decided that she was going to follow in her children’s footsteps and get a degree too. Although at first she was convinced she wouldn’t be able to do the study or cope with the technology, Amanda found a love for the study and completed in 2014. Amanda has now achieved the dream that she had from the age of 16 and is working in a school and teaching sport.

“I didn’t do very much at school. I got a few GCEs and I was going to be a teacher, but my mother wouldn’t let me go away to study further because then you had to work didn’t you. I used to dream about teaching and I got a place actually but then I couldn’t go. It was just really sad because it was my dream.

I then went on to do all sorts of jobs really, sometimes working 3 jobs and I struggled to get all my children through university. I dedicated my life to my children and I didn’t really look at doing any study myself until my youngest son went off to university. I’d always wanted to do the same and I think it was really that day that I came back home into my empty house that I thought ‘I want to go to university’. I knew I wouldn’t be able to go away though because I had a house to look after and my jobs, but I also didn’t know if I could afford it.

Over the years I’d always had a little look at The Open University, but I never thought that I could do it. I thought it would cost me far too much and that you’d have to have lots of A Levels or qualifications. When I dropped off my youngest son and came home that day I had a look at all kinds of universities. I punched in ‘Open University’ and I looked at all the courses that the OU offers and as I went through them I thought it would definitely be something I could do, so I did!

When I was 16 I wanted to be a food technology teacher but I also wanted to be a PE teacher because I absolutely loved sport. I came from a little town where there wasn’t anything there apart from tennis courts, so virtually all I did was sport. Working in sport as a PE teacher was something that I did actually dream about but I thought it would never happen. 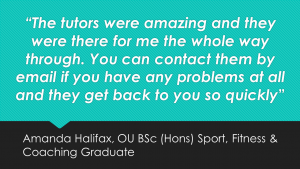 The tutors were amazing and they were there for me the whole way through. You can contact them by email if you have any problems at all and they get back to you so quickly. I had quite a lot of stresses and setbacks throughout my studies including very ill health and a car accident. At one point I didn’t know if I was going to be there to see the end of my studies and it was horrendous really, but the whole way through The Open University tutors and staff were there for me and they would phone me up. They weresuch supportive and caring people.

I didn’t think I could do it from the first day, but within a couple of weeks of actually looking at the books and just working through the weekly planner I found it easier. The weekly planner tells you what you have to read on each week, so I just tried to keep up with that and by the time I got to week 6 I was in the flow of it and I thought ‘I’m going to do this’.

I really quite enjoyed the sports psychology module because now that I work in a school and help with the PE students it helps me to guide them through their study and aids me with giving them confidence. I’m able to show them that they can do it as well.

One of the other good benefits about the course that I did was that I had to become a level 2 fitness instructor and again I’ve always really wanted to do that, but I didn’t think I could do that either. It was great and the fact that I passed that as well was fantastic! It also gave me other job possibilities too as it meant I could now work in a gym and so that also helped to increase my confidence.

I could never use computers and I have to say that was my big fear at the start. When I first started and everything had to be done online, that was the thing that actually frightened me because I was absolutely rubbish at it. But you get a step-by-step guide so I was able to take my time and to go through that. The whole way through there was somebody there helping me and then eventually all those big problems, that I thought were big problems, were no problems because I was flying through. 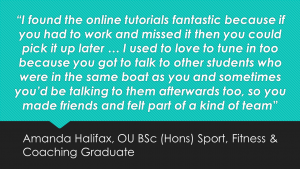 I found the online tutorials fantastic because if you had to work and missed it then you could pick it up later. I found it so, so helpful because all the time that I was actually doing my TMA I was actually having a look at the tutorial as well. I didn’t only play that back once either! I used to love to tune in too because you got to talk to other students who were in the same boat as you and sometimes you’d be talking to them afterwards too, so you made friends and felt part of a kind of team. Even though you didn’t actually get to meet those people in person they were there every month and so you just became quite close to them.

I didn’t really plan my study time every day because various things would change and happen in life. When I was doing my first course I had about two or three jobs, so I just used to sit down at weekends. I did used to take the books to bed with me at nighttime to read them too. I didn’t find it too much of a problem though because I really enjoyed it. I was also able to start applying what I was learning directly into my work in the school.

I was determined I wanted a BSc (Hons) Sports degree – I wanted that so much and it’s just changed my life. I’m not stopping now; I’m certainly not packing up teaching because I’ve finally got there and I love it. I feel fit, I feel healthy and I get to play sport. I also have a team of kids from the school in the English Squash championships and they’re doing really well. I would say to anyone not to think about it too much, just sign up for it and just do it, because you can! You’re never too old! If you have a dream then go for it. 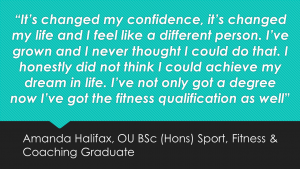 It’s changed my confidence, it’s changed my life and I feel like a different person. I’ve grown and I never thought I could do that. I honestly did not think I could achieve my dream in life. I’ve not only got a degree now I’ve got the fitness qualification as well and I have to say my computer skills are so much better, which is amazing.

I’ve had lots of jobs which I haven’t really wanted to do, but I’ve done them because I’ve had to get the money and I’m now in a job that I’m doing because I love the job, not because of the money. I’m being paid for a job that I love – it’s amazing. The biggest thing for me is that I’m now actually teaching and following the dream that I’ve carried with me since I was 16.”

If you have been inspired by Amanda’s story and would like to study sport and fitness at the Open University, please visit our ‘Study with us’ page.