As Wimbledon heads into it final weekend, another international competition begins on home soil.  Glasgow, a year on from hosting the Commonwealth Games, is the location for the IPC Swimming World Championships which takes place from 13 to 19 July 2015. The Championships will see over 650 swimmers from more than 50 countries looking to perform at the Tollcross International Swimming Centre ahead of the 2016 Rio Paralympic Games.  If you are unfamiliar with the event here is what to expect:

Seventeen swimmers, competing in front of a home crowd, will make up Team GB and comprises a number of world class athletes including multiple gold medal Paralympian Ellie Simmonds, four-time European champion Andrew Mullen, and Sascha Kindred who is competing at his seventh IPC Swimming World Championships.  As the build up to the championships gathered momentum, there was a British upset with S14 Paralympic Champion, Bethany Firth being forced to withdraw after she fractured her wrist in training with just two weeks to go. 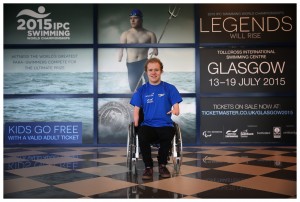 The rise of Disability Sport

Following the success of the London 2012 Paralympic Games an additional £8 million of National Lottery funding was provided to encourage more disabled people into sport.  This has been partially successful with 44 projects, mostly at grassroots level, receiving funding to increase participation in sport.  Last year Sport England identified that although the participation of disabled people in sport had risen, significant barriers still remain.  In their evaluation of their inclusive sport programme, Sport England recognised that swimming was one of the most commonly cited sports that disabled wanted to take part in, but had as yet been unable to do so.  The Paralympics in 2012 had a positive impact on the public perceptions of disability sport, but there is still more to be done.  The most commonly identified barrier cited was the ‘Attitude of Others’, which is in contrast to the practicalities that disabled people have typically identified as being the major barrier to participation in the past.  Although not every individual may aspire to perform at the level that we will see over the coming week, perhaps the excitement and live coverage of the event will not only inspire more disabled people to take part in swimming but also start to challenge some of the more negative attitudes that some people may hold about their participation in sport.

The event will take place in the 50m pool at Tollcross International Swimming Centre which was the venue for the 2014 Commonwealth Games.  Races will consist of swims in all four strokes (Freestyle, Backstroke, Breaststroke, Butterfly) and in the Individual Medley (IM: all four strokes in one race) across distances that range from 50 metres to 400 metres.  Swimmers are classified according to their disability and compete in events alongside other competitors who have been evaluated as having a comparable level of impairment.

How are the swimmers classified?

All Paralympic sports involve a classification system to minimise the impact of impairments on the sport, in this case swimming.  Having an impairment is not sufficient for classification, it has to be shown that there is an impact on the sport.  Paralympic swimming caters for three impairment groups – physical, visual and intellectual and athletes compete in the same strokes as able-bodied swimmers namely Freestyle, Butterfly, Backstroke, Breaststroke and the Individual Medley (IM).  The sport class names in Swimming consist of a prefix “S” (Freestyle, Butterfly and Backstroke events), “SM” (Individual Medley), or “SB” (Breaststroke) and a number. The prefixes stand for the event and the number indicates the sport class the swimmers competes in.

Classification is not a simple task and there have been a number of high profile controversial disputes over classification in recent years.  In the build up to the last World Championships in Montreal in 2013, gold medal Paralympian swimmer, Victoria Arlen (USA) was ruled ineligible to compete. Victoria had spent three years in a vegetative state because of an autoimmune disorder and woke with paralysis of the legs and a number of other symptoms consistent with the neurological condition transverse myelitis.  However, after winning a gold medal in London 2012 in the S6 100m freestyle the International Paralympic Committee ruled that she was ineligible to compete in disability swimming events as she could not provide evidence of having a permanent impairment with no hope for recovery. More information on classification can be found at http://www.paralympic.org/swimming/classification

With a multitude of events, the scheduled appearance of many Paralympic stars, and several British medal hopes this competition looks set to be an exciting one!  Follow the excitement of the event and the fortunes of the Team GB stars at http://www.paralympic.org/glasgow-2015.