Michael Trott joined the Army in his late teens and spent two years with the Royal Electrical and Mechanical Engineers (REME) before being medically discharged. He decided to embark on the OU’s Foundation Degree in Sport and Fitness as he felt education was the only way forward. Michael says he is now a different person. He recently won ‘The One’, a competition for fitness instructors from all over the world and will be travelling to New Zealand early in 2016 to take part in the masterclass filming. Michael hasn’t ruled out the possibility of further OU study and is considering the MBA, which he hopes will gain him entry to the world of sports management.

“I left school with no A levels and joined the Royal Electrical and Mechanical Engineers (REME) when I was 19. After two years I was medically discharged from the Army and a few years later decided education was the only way forward. I’d heard about the OU, so I had a look at the website. I’d always enjoyed sport and because of my injuries was attracted to physiology, 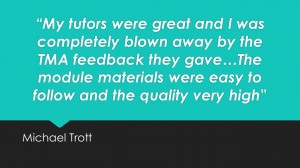 so the Foundation Degree in Sport and Fitness appealed to me. I discovered that I was eligible for financial aid because of my injuries, so I signed up. An additional benefit of the OU was its flexibility – I’d be able to carry on working while I was studying.

The registration process was very easy; I enrolled for all my modules online. The only paperwork I had to complete was the application for financial aid.

My tutors were great and I was completely blown away by the TMA feedback they gave; it was so detailed. They were also very prompt to respond whenever I emailed them to ask questions. The module materials were easy to follow and the quality very high. One of the best things about the OU is that everything is given to you on a plate – you always know what you have to do and when. For me, the online discussion forums and tutor group forums were also helpful. 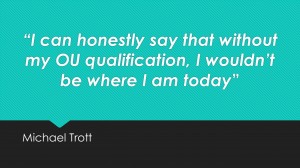 I can honestly say that without my OU qualification, I wouldn’t be where I am today. I was what you might describe as a ‘typical’ soldier, but studying with the OU has changed me as a person. There’s a lot of respect out there for an OU degree, which helps career wise. I now work at the University of Cambridge as a fundraiser and I teach fitness classes around the city. Recently, I represented the UK at ‘ONE LIVE’ in Stockholm in the final of ‘The One’, a competition for fitness instructors from around the world and I was delighted to be declared the winner!

Getting my degree wasn’t without its challenges. The biggest one for me was learning to write academically. What kept me going, though, was the fact that I was enjoying my studies and was able to apply what I was learning to my everyday life; quitting would have been counterproductive. Learning to write well has obviously paid off: I’m now a guest blogger for WatchFit and a contributing writer for Myprotein.

I’ll always remember my graduation ceremony at the Barbican Centre. It was a great day and being there made everything ‘official’. Another major highlight of my OU experience was getting good grades for my assignments.

Who knows what’s next for me? Winning ‘The One’ means a trip to Auckland, New Zealand in January 2016 to take part in the masterclass filming. As regards further study, I’d definitely do an MSc with the OU if one in sport and fitness were available. At the moment I’m looking at the possibility of doing an MBA with the OU as it’s such a highly regarded qualification and would help me enter the world of sports management.”

If you have been inspired by Michael’s story and want to study sport and fitness at The Open University please visit the ‘Study with us’ section of this website.