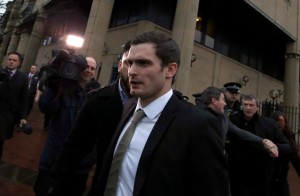 On 2 March 2016, 28-year-old former Sunderland footballer Adam Johnson was found guilty of grooming (a strategy used to convince or coerce a child or young person to engage in sexual behaviour) and sexual activity with a 15-year-old girl. At the time of his crime, his then girlfriend Stacey Flounders had just given birth to their daughter, and he has since also admitted to cheating on her several times.

Now he faces a ten-year sentence, serving a minimum of five years. Although in this case the offence concerned a child, this is certainly not the first instance of sexual or violent offences, or disrespectful behaviour towards women we have seen from footballers.

In 2012, Ched Evans was convicted of raping a 19-year-old woman and he has since served half of his five-year sentence. Since his release in 2014, he has pushed to return to his club Sheffield United, but they withdrew an early offer after the intense public response.

These recent cases have sparked debates about whether sportspeople who have crossed the line should continue to occupy the exalted status of “sports star“. However, why do they think they will be able to get away with it in the first place?

One of the problems with the culture of sport is that it places athletes on a pedestal that gives them celebrity status. Many argue that competitive sporting environments provide a unique socio-cultural context that offer possibilities for sexual abuse and exploitation to take place.

Research has found that male college student athletes were responsible for a significantly higher percentage of reports of sexual assault on the campuses of Division I institutions (the highest level of intercollegiate athletes).

When sportspeople believe that they are above the law, invincible, or incapable of being hurt they can undermine respect for authority or social norms and can result in criminal activity or deviant behaviour

Men’s football, in particular, provides a platform to global celebrity, bloated salaries, corporate sponsorship and fan adulation that can catapult male footballers into famous millionaires. This status comes with power that has the potential to be abused.

As Scott Goll wrote, professional athletes seem to be “used to getting what they want. They get the attention. They get the money. To some extent, I believe there’s a sense of entitlement.”

Therefore, when sportspeople believe that they are above the law, invincible, or incapable of being hurt they can undermine respect for authority or social norms and can result in criminal activity or deviant behaviour. They believe that the “jock culture” of which they are a part takes precedence over any other authoritative structures outside their sporting world.

Furthermore, this sense of entitlement and invincibility seems to be preserved; when they do commit serious offences (e.g. violent or sexual), evidence suggests that “professional athletes are not punished by the leagues, teams, or criminal justice system as harshly or consistently as their general public counterparts”.

The overwhelmingly high value placed on men’s sport, specifically men’s football, means that they think they can get away with it and maybe many of them do given that abuse is likely to be underreported.

“We need to enable and support victims, bystanders and other sportspeople to become ‘whistleblowers’ in order to continue to challenge the ‘lad culture’ that seems to exist in football”

During the trial at Bradford Crown Court, Johnson claimed he told Sunderland’s chief executive Margaret Byrne “everything from the start” and that he had kissed a 15-year-old fan. Following his arrest, he was suspended. However, this suspension was lifted 16 days later with him then playing nine months of football, during which he earned £2m.

Sunderland FC have now issued a lengthy statement denying they were aware of Johnson’s intentions to plead guilty and would have sacked him earlier if they did. The statement added that Johnson’s claim he informed the club of his intentions “is utterly without foundation and is refuted in the strongest possible terms.”

In response to Johnson’s guilty verdict, football fans have also taken to social media and some of the responses following Johnson’s conviction highlight the way ‘lad culture’ can trivialise and normalise the issue.

When victims are subjected to abuse by a famous footballer, it can be extremely difficult to report it; they feel they won’t be believed and there is a risk of victim-blaming and trivialisation from football fans. Not only did Ched Evans’ victim experience the worst victim-blaming ever seen in this country after moving house five times because she was repeatedly named on social media, but she will have to relive this ordeal again when his conviction is reviewed later this month.

Similarly, Adam Johnson’s victim was subjected to bullying and abuse when her name and picture were unlawfully posted online. She was called a “slag” who was “making it up”, or a “slut” who must have lured the footballer by claiming she was over 18.

We need to enable and support victims, bystanders and other sportspeople to become ‘whistleblowers’ in order to continue to challenge the ‘lad culture’ that seems to exist in football. In the US, the Major League Baseball Players Association have done this by suspending Ardolis Chapman for 30 games after domestic violence allegations from his girlfriend. This action demonstrates a strong statement that the MLBPA does not condone this sort of behaviour and are adhering to the sport’s new policy on domestic violence.

Since 2014, debates have emerged that question whether sportspeople should be able to return to compete after a conviction involving a sexual offence, and be positioned on a pedestal where they continue to hold wealth, power and be glorified in the public eye. But should footballers be granted this much power in the first place.

This article was originally published on IBTimes. Read the original article.