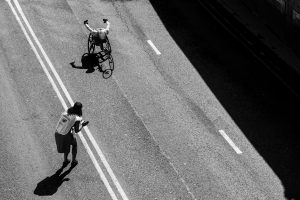 Every four years the Paralympic games are hosted as a parallel to the Olympics. This paramount international multi-sport event has become the largest single sporting movement globally, full of numerous inspirational, admirable athletes, leading to an emotional para-sport. As the Paralympian’s have a vast range of disabilities, from impaired muscle power such as muscular dystrophy, to limb deficiencies caused by amputations, the need for characterisations is crucial. However, these classifications are of high-priority, the International Paralympic Committee (IPC) (2014) illustrates the worry of predictable competition, in which the most able athlete always wins. Hence, the division of para-athletes into ‘sport classes’, established upon their impairment, preventing such concerns.

What is the classification system?

Any Paralympian has a competitive disadvantage when it comes to sport. Hence the classification system. The system allows for the division of para-athletes into their correlative sporting groups, identifying the severity of their impairments. The intention of the classification system is to decrease the impact of individual physical impairments on the overall sports performance, identifying the athletes according to their limitations in a certain sport. The athlete’s fitness, skill, power, ability, focus and tactical ability are now relatively proportional to their competitors, ensuring for equal chance at success, with fair qualifying. Athlete’s performance is dependent on the sport, each sport requires performance of different activities. Consequently, the impact on impairments differs, for classification to minimise the effect on sporting performance classification must be specific (IPC, 2014).

However, the Paralympics permits the observer ignorance, watching from behind a tv or, if lucky enough, the stadium, yet it’s not so innocent. The precise classification process allows exploitation, the IPC warned the BBC (2017) of intentional misrepresentation – athletes bluffing, pretending to have a graver disability with the hope to compete in favourable classes. Paralympian’s described the process of more able-bodied athletes being put into the same categories as severely disabled athletes, with the intention to win by cheating. In the words of hand cyclist Liz McTernan (2017) “we’re not all inspiring, we’re not all ethical”, faking disability is no different to doping.

Blood tests confirm the miss use of drugs, unfortunately, the ability to prove such impairment cheats is not so simple, with no definite way to verify allegations. Despite this, Van de Vliet (2017), the IPCs medical and scientific director, as well as head of classifications, has reassured specific athletes are monitored, with the view to identify consistent manifestation during performances, on-going investigations, with some cases being processed by external legal counsels.

What are the Dirty Tactics?

Further investigations, such as that by the BBC (2017) uncovered the ‘dirty tactics’, manipulating the classification system. Allegedly, schemes were employed by both athletes and coaches.

These modern tricks are now described as the para-equivalent to doping. The classification process being criticised due to sport class expansion, allowing less impaired athletes to compete against extreme cases. The classification controversy is with hope to increase medal chances, and sponsorship. Accusations of intimidation and bullying are also present, many athletes are afraid to speak out, fearful they will not be selected for the sport they love (Grey-Thompson, 2017). Cheating in the Paralympics is proof athletes are prepared to go to extreme lengths to stand on the podium.

What does this mean for future Paralympian’s?

Ultimately, the Paralympics is a means of enjoyment, internationally inspiring various social groups proving the impossible is possible. If only this viewpoint was enough to end cheating, unfortunately not.

Ongoing investigations into the Paralympian classification systems, as well as several inquiries into sporting governance are all with the intention to prevent deception. Eriksson, head coach at the Paralympics GB Team 2012, states classifiers are ‘doing the best they can’ (2017). Although, elaborates on the belief the process pinpointing the lies requires an independent organisation, comparable to the World Anti-Doping Agency, using drugs in sport and the means of prevention as guidance.

Strong evidence is a must, confirming cheats is a sensitive issue, for this reason there’s a demand for a powerful case. Paralympic cheating needs to be tackled, tougher punishment, strong repercussions, the same penalties for doping infractions. The hope independent organisations attack the frauds, depleting dishonesty and lies, allowing for less questionable classification to occur.

The Week – Paralympics: ‘Faking disability is no different to doping’ (2017). [Online] Available at: https://www.theweek.co.uk/paralympics/88468/paralympics-faking-disability-is-no-different-to-doping