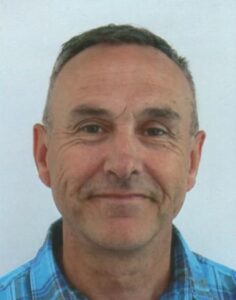 When I left school in Scotland back in the early ‘80s I went to university to study science but after a year I decided it wasn’t for me. I was a real disappointment to my folks – the first of my generation to go to university and the first one to drop out!

After doing menial jobs for a couple of years I decided to go back to college and completed an HND in business studies, with a view to improving my prospects. However, unemployment was high back then, jobs were few and far between and it looked like I was going to have to relocate if I wanted to work, but that wasn’t acceptable to me.

Since I was a kid in the scouts, I’d always been into hillwalking, canoeing and kayaking, all these things you can do outdoors. It’s always been my thing. I decided to do some voluntary work at outdoor centres to become qualified as an outdoor instructor, but political changes at that time closed a lot of outdoor education jobs. I didn’t see a future in that area, so a complete change of career plan followed, and I joined the police.

After a couple of years as a cop I decided to improve my higher education and transferred the credit from my HND to the OU, to do a Social Policy Diploma. I wanted to see what the academics made of the social problems I was confronted with on a daily basis, and I felt a degree would help with promotion. I got support from the police with funding, which helped quite a bit, and studied around my shifts.

After achieving the Diploma in Higher Education, I decided to study further courses in sociology and criminology, and went on to achieve a BSc (Hons) Open degree with the OU. Studying those areas helped me in my police career. I gained a wider knowledge and perspective on the things I was dealing with, because social problems and issues around social welfare are the main thing you’re dealing with as a uniformed cop. The studies gave me more confidence, especially when I moved from dealing with people at street level to being a detective sergeant in the economic crime unit. There, I was often investigating lawyers and bankers committing fraud, you might say a more educated form of criminal.

All the time I was in the police force I kept up my interest in the outdoors and I decided that when I retired from the force I was going to work as a freelance outdoor instructor. You retire from the police at a relatively young age with a decent pension, so the freelancing world is good to work in if you don’t need to depend on finding a regular full-time income. During my last few years in the force I spent a lot of my spare time gaining outdoor sports coaching qualifications and when I did retire I picked up work as a freelancer, mainly at outdoor centres. That kept me busy in summer, but I was conscious that during the winter I wasn’t going to get as much work, so I thought I’d go back to study again. That’s what led me to the course I’m studying now, which is the BSc (Hons) Sport, Fitness & Coaching. I wanted to study the theoretical background of sport, fitness and coaching to support me in my day-to-day work, I suppose similar to what I did when I was in the police. I’m funding my studies from what I make as an outdoor instructor. 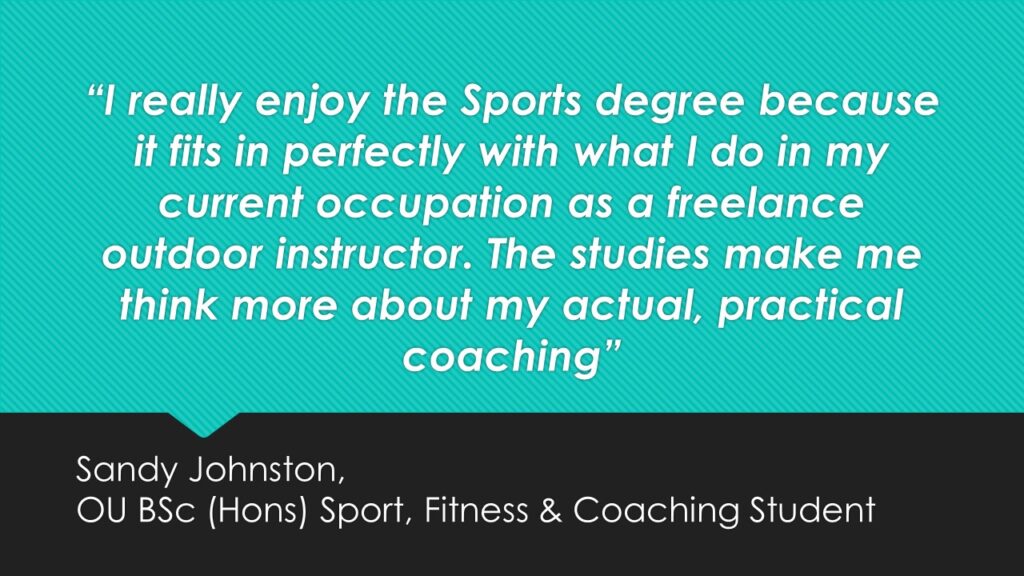 I really enjoy the Sports degree because it fits in perfectly with what I do in my current occupation as a freelance outdoor instructor. The studies make me think more about my actual, practical coaching. There’s lots of little nuggets of information I’ve learned. Coaching has always fascinated me, so I’ve studied coaching theory before, but this course is filling in some of the blank areas. You get that satisfying kind of, ‘Oh that’s why!’ realisation when you study and discover the reasons why certain approaches or methods work better than others.

One major thing I’ve learned is that there’s a big difference between a coach and an instructor. For example, it’s very important from a coaching point of view that, especially when you’re going to be working with someone over a period of time, you’re not just providing answers to the questions that they are seeking but leading them to find out the answers for themselves. As a coach, you should be helping them to think, rather than saying, ‘This is what you do. Here’s the answer.’ That, according to coaching theory, is what helps your pupil retain what they’ve learned, rather than them just doing what you tell them to do and then forgetting about it.

The biggest challenge of studying comes whenever I have an assignment deadline! That’s when you say to yourself, ‘Why am I doing this?!’ I just try and avoid the procrastination and get on with it but it’s very easy to find other things to distract you.

This is my second Open University degree, so I know I can do it, it’s just a matter of working away at it. But I think the inspiration for my first OU course was my Mum. When I was about 14, my Mum, who left school with no qualifications, decided to go back to college, earning higher education qualifications and ended up working as a college lecturer.

The main difference between the OU back in the ‘90s and the OU today is not having to set your video recorder for 2am to record a programme you need to see to study your module! Everything’s available online now, which is a great improvement, as it’s easier to access, although the quality of the course materials was just as good then as it is now. 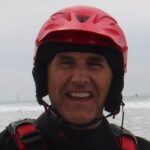 I now have my own little business: Sandy Johnston Coaching. I coach people in kayaking, canoeing and watersports, mostly. It’s a nice way to work, working for myself and freelancing with other organisations, such as the scouts or different outdoor centres. It’s really enjoyable and I’m getting paid for something I love doing.

My plans for the future are to expand my own coaching business and to work with long-term students to help them to develop. I’m going to continue my studies in coaching. I’m a performance coach in Whitewater kayaking and I would quite like to do the next step up – British Canoeing Coaching Level 4, which is a postgrad diploma – because I want to improve my standing as a coach. I’ve got another ten to fifteen years of my working life left so it would be nice to work at the very top end of coaching.

My advice to anyone thinking of doing an OU course? Just do it!