This summer in the absence of an Olympics Games or major men’s football tournament sports fans are relying on events such as the women’s Football World Cup, the first European Games in Baku and the ICC women’s championships for entertainment.  From Monday 29th June this will be supplemented by two weeks of Wimbledon fever and a supply of tennis from lunchtime to bedtime.  The British tennis fans will be asking whether all our hopes of glory rest with Andy Murray or can any other British players have a good run in the tournament. 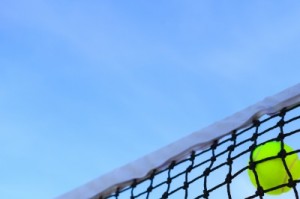 Image courtesy of PinkBlue at FreeDigitalPhotos.net

The men’s singles and women’s singles could not be more different at the moment in terms of predictability.  If asked most people would answer that one of four, possibly five, men will win the men’s title while it seems that anyone could win the women’s title.

Serena Williams is once again the favourite for the women’s title and has been in spectacular form winning the last 3 major tournaments.  Most recently she won the French Open on her less favoured surface of clay but she hasn’t won Wimbledon since 2012.  Is she overdue to win or is her time at Wimbledon over?  If not Serena then two time winner and defending champion Petra Kvitova must be a favourite to succeed or Maria Sharapova, who has not won since 2004. These three stars of the game are joined in the top 5 by Simona Halep of Romania and Caroline Wozniacki of Denmark, both of whom have appeared in Grand Slam finals. Personally, I think this may be the year for Wozniacki who has underperformed at Wimbledon but in the last two years her performances have steadily improved and she has gained the consistency needed for success.

Novak Djokovic is favourite for the men’s title just ahead of Andy Murray.  They recently shared an epic semi-final on clay at the French Open that Djokovic just won before he was beaten in the final by Stanislas Wawrinka.  We are living through probably the toughest era in men’s tennis where four men, Djokovic, Federer, Nadal and Murray, have been competing for the major titles.  There has often been a rivalry between two players but never have we had four of the best players ever to play the game competing in the same era.  This has meant that each man has had to raise their game and work on every weakness to remain competitive

I think that this year may be Andy Murray’s year to win a second title.  Firstly, he came very close to beating Djokovic after producing incredible tennis to drag himself back from two sets down. Djokovic is probably his closest rival at the moment and grass courts represent Murray’s favourite surface.  He recently replicated his form of 2013, when he previously won Wimbledon, at the Aegon Championships to win the tournament convincingly.  His form has been up and down over the last two years but he finally seems fit and strong after his back surgery towards the end of 2013.  Murray needs to ensure that he doesn’t lets his opponent back into the match during the second set after he has won the first.  If he can show his ruthless streak he would be very well placed to succeed this year.

Are there any other British players to watch out for?

Heather Watson and Laura Robson are now well established on the tennis circuit but Robson has only recently overcome a wrist injury that had kept her side-lined for 17 months.  Watson is joined in the top three British women by Naomi Broady and a relative newcomer, Johanna Konta.  Konta is Australian born and has never got beyond the first round at Wimbledon, however, she performed impressively at the pre-Wimbledon Aegon tournament in Eastbourne where she knocked out 2 top-20 players so she is definitely one to watch.

British men’s tennis has a new number two in the shape of Aljaz Bedene who is ranked 74 in the world and has held a British passport since March, having moved to Britain from Slovenia seven years ago to develop his tennis career.  It is the first time since the days of Henman and Rusedski that Britain has had two men in the world’s top 100. He has never won a grand slam match but is one to watch to see how he responds to the fervent support of the British public.

This summer may be quieter than others but hopefully along with the England women’s football team and England cricket teams there will be plenty of success to savour.