With the Rugby World Cup final taking place this weekend both teams will be looking for the small gains in their preparation that could mean the difference between success and failure. One such area that has received a lot of attention in recent times is sleep. As I’ve discussed in a previous post, recovery is an important part of competing in a major tournament. Both New Zealand and Australia have played six matches on their way to the final, which could take its toll, therefore, how they recover from that demand is vitally important to their chances of success. Sleep is perhaps the ultimate recovery strategy, but why is it considered to be so important? 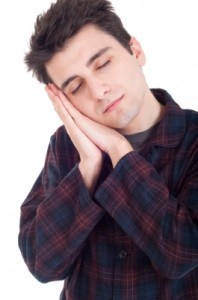 Image courtesy of artur84 at FreeDigitalPhotos.net

Sleep can be defined as a complex state with both physiological and behavioural components where the individual is temporarily disengaged and unresponsive to the environment (Halson, 2013). There are two key stages of sleep – rapid eye movement (REM) and non-REM. It is NREM sleep that contains deep sleep (known as slow wave sleep). This is the period that is thought to be particularly important for recovery in sports people.

Why is sleep important for sports people?

Outside of sport a lack of sleep is often considered to have detrimental effect on performance. For example, we are advised not to drive or operate heavy machinery whilst tired. It therefore seems logical to assume that tired athletes are likely to underperform. Anecdotally there are many accounts of sleep, or a lack of it, having a detrimental effect on sporting performance. Whilst the purpose of sleep is not fully understood it is generally accepted that it is required to facilitate recovery and preparation for functioning (both physiological and cognitive) in the next waking period (Fullagar et al., 2015; Halson, 2014). Therefore the sleep an athlete has the night before and in the days leading up to a competition (e.g. Rugby World Cup final) is important. The challenge here is that athletes often report sleeping difficulties the night before an important competition due to pre-competition anxiety or excitement (Juliff, Halson, & Peiffer, 2015). Additionally, the sleep patterns and sleep quality of travelling athletes can be negatively affected by factors such as jet lag, change of routine and unfamiliar surroundings. This is particularly important when the 2015 Rugby World Cup final is to be played by two southern hemisphere teams in a northern hemisphere location. That said, both teams have been in the UK for a while and will have likely established sleeping routines. It would be very surprising if this is not an aspect of recovery that both teams have put strategies in place to address.

What does the research say?

Previous research has suggested that sports performers may be vulnerable to sleep disturbances due to a variety of reasons including early training sessions, poor sleep habits, caffeine use, travel, and pre-competition anxiety. Whilst sleep is a broadly researched area, the body of research examining sleep amongst sports performers is relatively small (Halson, 2014). Research that has examined the relationship between sleep and sports performance has explored the effects of sleep deprivation, partial sleep deprivation/sleep restriction, sleep extension and napping. In their review of the literature Fullagar et al. (2015) concluded that there is evidence to suggest that sleep deprivation has a significant impact on sports performance.

The time of day that the World Cup final is held could also have an impact on performance. The World Cup final will be played at 4pm, but Australian fans reportedly requested a change to 8pm. It seems that everyone has an optimal time of day that they perform at their best, dictated by their body clock or circadian cycle. The video below gives a simple explanation of this, splitting athletes into ‘larks’ and ‘owls’. It would appear that a 4pm kick-off favours intermediate types (peak performance around 16:00) rather than pure ‘larks’ (peak performance before 12:00) or ‘owls’ (peak performance around 20:00), whilst the change favoured by Australian fans would favour ‘owls’. However, this simple analogy does not take into account the experience, preparation and complex sleep patterns of the two travelling teams.

Who will win the Rugby World Cup remains to be seen, but it is possible that sleep could be a contributing factor. Sleep appears to be an important part of the athlete’s recovery and preparation and can potentially influence performance, so in order to get a top quality final tomorrow let’s hope that both Australia and New Zealand get a good night’s sleep tonight!