When I began studying with the Open University, I was at a low ebb. I had recently retired due to ill health and had suffered several devastating bereavements in a short space of time.  Previously I had enjoyed a long and varied career, which included decades of psychiatric nursing in the NHS and a stint in the Royal Army Medical Corp (RAMC). However, I was in a bit of a rut and felt as though I needed to undertake a new challenge. 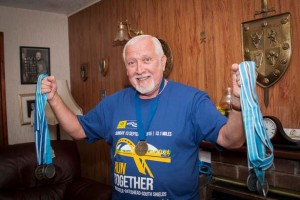 Having run 115 full marathons and 103 half marathons for charity over a period of several decades, I have something of a passion for sport and athletics. Therefore, I decided to pursue an OU course that involved these two fields. In 2008, I commenced the module E112, titled ‘Introduction to sport, fitness and management’. Since then, I have successfully completed a total of five modules with a view to attaining a BSc (Hons) degree in Sport, Fitness and Coaching. I have just begun my sixth and final module. Studying with the OU has given me a greater sense of purpose, as well as having broadened my mind.

From the day I started studying with the OU until now, I have always enjoyed the very best of support from the OU. During my studies, I have suffered more bereavements and more bouts of ill health and there have been times when this adversity has caused me to consider effecting a cessation of my studies. However, thanks to the help and advice that I have received from Student Support, the North-West branch of the OU, my various course tutors and the Milton Keynes faculty staff I have always been able to overcome such adversity and progress with my studies. The university staff have been incredibly supportive to me. 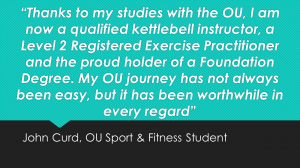 Thanks to my studies with the OU, I am now a qualified kettlebell instructor, a Level 2 Registered Exercise Practitioner and the proud holder of a Foundation Degree. My OU journey has not always been easy, but it has been worthwhile in every regard. I look forward to the rest of the academic year and the challenges and accomplishments that it will bring.